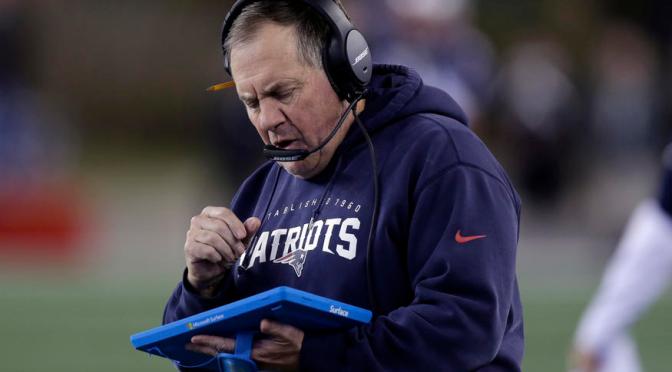 Look, if Bill Belichick told me to light myself on fire and play Russian Roulette in the process, the first thing I’d ask if where is the match and who has the revolver? Did I scowl at the notion that he instructed Matthew (AC) Slater to kick off in overtime rather than receive? Absolutely, it is my job to question decisions like that. I love how the four letter network (ESPN) is talking more about Slater’s call than Peyton and his wife being part of some HGH drug cartel. Is Mark Brunell crying yet? Regardless, our boys dropped a close one yesterday. A few things became very apparent in yesterday’s loss to the New Jersey Jets. Before anyone jumps down my throat on this one, they play in New Jersey, not in New York.

Numero Uno – Belichick didn’t trust the Patriots offense. Plain and simple. Our hero spent more time on his back than he did on his honeymoon with Giselle. He was harassed all day and Marcus Cannon resembled a turn-style at times. Sea Bass went down with some sort of ankle injury, and it just snowballed from there. I can’t count how many tackles and offensive linemen this team has blown through, but the count is climbing by the week. You brought back the exiled Chris Harper, Brandon Lafell was virtually a non-factor, and Gronkowski was the only guy Brady really trusted throughout the day. And the running game resembled something you’d see from a Pop Warner team running east to west instead of north to south. Combine that with the defense playing fairly decent in the fourth quarter, Bill rolled the dice and lost.

Second – Malcolm Butler Gets Beat…. A lot. Look, the guy never has to buy another drink in the New England region ever again. He made the biggest play in Super Bowl history and murdered the Seahawks in the process. However, he is CONSTANTLY out of position, struggles against bigger/physical receivers, and really struggles in press coverage. Having said that, he is the best cornerback they have and will be an important cog in the defensive machine come January. He is a young player and he should grow into a top tier cornerback. But let’s not anoint him the next Deion Sanders. He is a glorified James Sanders at this stage of his career, minus the murder of the Seahawks.

Lastly – Winning The Coin Toss Means Squat – I love the kill them, go into halftime, and kill them again trick as much as the next guy. We’ve seen it more times than I can remember from Brady and the Patriots. I still can’t wrap my head around sitting on the ball at the thirty-five yard line with two time outs before the half. Isn’t the point of deferring to get an extra possession to end the half and start the second half with the ball? This is the fourth time, FOURTH, that they have done it this year. I don’t want to hear injuries are a part of this either. You have the best quarterback and best kicker on the planet, whom very rarely let you down. Put some stock in them and let them do what they do best.

But let’s bring things back to reality for a second. The number one seed is still well within reach. Indianapolis went down there and beat them with a guy who has a ponytail. Yes, he has a legit ponytail. I’m hoping Miami crawls into their off season hole by halftime and we can see Jimmy G sling it for a bit to close out the game. Pittsburgh is on the outside looking in and Kansas City all but wrapped up the five seed. More than likely they will be heading to Houston and the Jets will head to play the Bengals or the Broncos. I could care less who ends up where, because if this team gets healthy, Giselle and the other wives should just start booking wine tastings in Napa now for the first week of February.