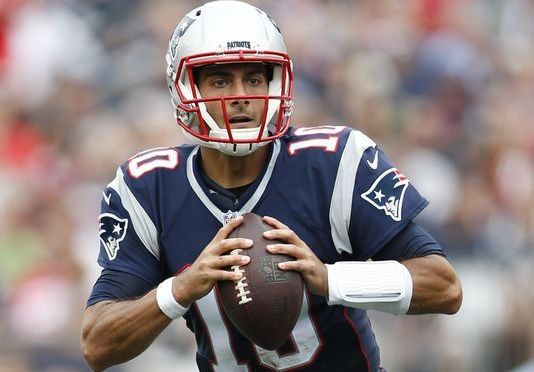 The Patriots have officially traded backup quarterback Jimmy Garoppolo to the San Francisco 49ers for a second-round pick in the 2018 NFL Draft. This trade comes as a major surprise to just about everyone, especially after the Patriots did not trade Garoppolo during the 2017 offseason or NFL Draft. There were reports all offseason and even on draft night that the Cleveland Browns had major interest in acquiring the quarterback, but the Patriots did not want to move on from Garoppolo. There were even some rumors and reports claiming that the Browns were willing to trade two first-round draft picks to acquire the Patriots backup.

There are a few different ways you could look at this trade; don’t like that the Patriots traded Garoppolo in general, don’t like how they didn’t trade him for the rumored Cleveland deal during the last NFL offseason, or happy that they moved on from Garoppolo and still at least get something for him. Consider me part of the latter two. Garoppolo’s trade value was never going to be higher than it was this past NFL offseason after playing a good six quarters against the Arizona Cardinals and Miami Dolphins during Tom Brady’s four-game suspension, and he had one year left on his deal. The Patriots could have moved on from Garoppolo then and potentially could have gotten more in a deal, they didn’t. Belichick coveted Garoppolo and talked great about him all offseason to the point you didn’t think he was trying to drive up trade value, you got the sense that Belichick believed in Garoppolo and him potentially being the quarterback of the future for the Patriots.

The question then comes to why trade Garoppolo now? Many reasons, the biggest likely being the play of Tom Brady, who at 40-years old has shown no signs of regressing and seems to be getting better with age. Another reason could be maybe the team has had talks with Garoppolo and his agent Don Yee that could have gone bad where maybe Garoppolo said he didn’t want to be in New England after the year and wouldn’t sign an extension with the team or wouldn’t sign the franchise tag if it was given to him by the team in the offseason; which wouldn’t allow the team to trade him, ultimately making him a free agent following the 2018 season and the team getting nothing for him. And then there’s the reality that the Patriots are banged up on both sides of the football and that they likely need to make a move before the trade deadline at 4pm on Tuesday. The Patriots only had five draft picks for the upcoming 2018 NFL Draft prior to the Garoppolo deal, making it hard to move any of their current picks to acquire players in any potential trade. The only way to get more assets is to give up one of your own, and the Patriots had a great one to give up just sitting on their bench. I fully expect the Patriots to make another big move before the trade deadline, either giving up their own first round pick or the pick they acquired from San Francisco, which will likely end up being number 33 or 34 overall.

I was never a big Garoppolo fan or a believer that he was the quarterback of the future. I thought he could have and should have played last year following the AC Joint injury in his shoulder because he was fighting for a job, if not here than somewhere. People make the argument “he had a good six quarters” and that’s all it was, six quarters. People also often forget about the four bad quarters he had against Buffalo in the 2014 season finale, though I even give him some benefit of the doubt there that he had more time to learn and develop. But what about the struggles every year in training camp and preseason that he had? I never saw what other people did in Garoppolo where he was going to be a great NFL quarterback, I think he would and will probably be good but he won’t be great. I LOVE this trade because you’re still getting something for him while you can, and I think what you got will turn into something else before the 4pm trade deadline on Tuesday.

PPS: Former Patriots quarterback Brian Hoyer was just released as I’m writing this, guarantee he will be signed as the Patriots backup. 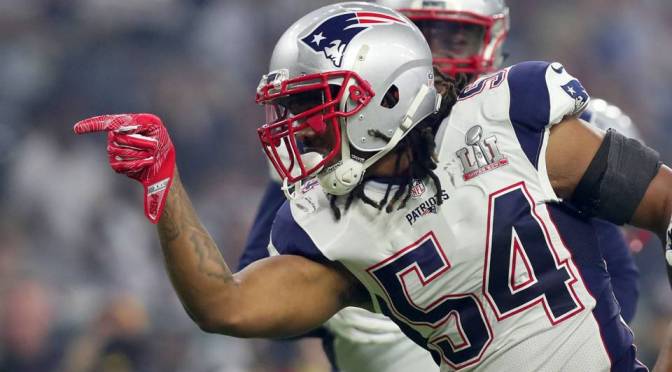 Just when the Patriots defense starts to take a step forward in their play, they just took two steps backwards with the news that linebacker Dont’a Hightower will miss the rest of the season due to a torn pectoral muscle. Hightower is not only the leader on defense, but also the team’s top player at their weakest position which is linebacker. The team will have some decisions to make on how they go about replacing their star linebacker, whether it be through inside the organization or outside of it through a trade or signing someone off the streets.

The productivity and level of play that Hightower gives, the Patriots likely won’t be able to replace with just one player and might have to make several roster moves going forward. One move that the team is almost certain to make is removing linebacker Shea McClellin off of the injured reserve list when he is eligible to be taken off. The first game McClellin would be eligible to play in is on November 12th against the Denver Broncos following the team’s bye week. McClellin’s presence should help the Patriots linebackers in coverage against backs and tight ends, an area where the team has struggled mightily this season. Given the lack of depth at the linebacker position McClellin should be able to step in and contribute right away.

One thing that might be overlooked with the Hightower injury is his pass rushing ability and how this affects the defensive line. The Patriots really only have two true defensive ends and pass rushers in Trey Flowers and Deatrich Wise Jr., as well as Cassius Marsh who has goes into the game in certain third down situations but is primarily a special team’s player. Kyle Van Noy has the ability to rush the passer but doesn’t quite have the consistency and skill of Hightower of getting after the quarterback. The Patriots could turn to a couple of familiar faces to help in this aspect of the defense including Rob Ninkovich, who announced his retirement this summer but didn’t 100 percent rule out a possible comeback, and free agent Akeem Ayers who was a member of the Patriots 2014 Super Bowl team and is someone the team worked out at the beginning of the season. It is unknown what either guy has left in the tank and what they would be able to contribute, but their knowledge of the defense would allow them to be able to step in and contribute right away.

While its unknown what players could be on the trade block, someone who the Patriots could be interested in is also another familiar face in Jonathan Casillas. Like Ayers, Casillas was acquired by the Patriots mid-season in 2014 and was part of the Super Bowl Champion team and has familiarity with the defense. Following the 2014 Casillas signed with the New York Giants, with whom he still plays for, but with their 1-6 record they could look to trade some players and rebuild in the offseason. If available Casillas is someone I would expect the Patriots to look into before the trade deadline October 31st.

We are now through the first month of the NFL season, and so far it’s fair to say that the reigning Super Bowl champion New England Patriots have disappointed so far. The Patriots stand at 2-2 and second in the AFC East behind the Buffalo Bills.
The biggest disappointment so far for the Patriots has been the play of the secondary, most noticeably big offseason addition Stephon Gilmore. Gilmore has struggled in coverage and with penalties early this season, including a hands to the face penalty late in the 4th quarter against the Carolina Panthers which helped play a role in the Patriots loss.

The Patriots other big offseason acquisition in wide receiver Brandin Cooks hasn’t played as big of a role as most expected, but has shown signs of promise. Cooks played a huge role in the Patriots win over the Houston Texans where he had five catches and racked up 131 yards with two touchdowns, including the game winner with twenty-three seconds left in regulation.

While the Patriots offense hasn’t looked as smooth as it has in years past, they are still performing at a high level with Tom Brady maybe playing his best football yet at age 40. The Patriots struggles so far is solely on the defense and coaching. Through four games the Patriots are allowing 32.8 points per game, which is last in the NFL, a big difference from the 15 points per game the defense let up last year, which led the entire league.

The Patriots defense will be tested yet again this week when they face off against the Tampa Bay Buccaneers on Thursday Night. If the Patriots don’t want to move to 2-3 on the season the biggest change they need to make is their defensive scheme and play a tight man defense, rather than the zone they have been playing. Malcolm Butler is one of the most physical and scrappy cornerbacks in the entire league and Stephon Gilmore is one of the bigger corners in the league standing at 6’3. The Patriots need to play to their strengths; which is being physical off the line of scrimmage. Playing a tight man coverage won’t allow quarterbacks to throw underneath and in the middle of the field, and will also allow the Patriots to send extra pressure after the quarterback. The scheme and game plan that defensive coordinator Matt Patricia has been running so far this year hasn’t been working and it’s time to make a change to best fit the strengths of your players, if not Buccaneers’ Jameis Winston and Mike Evans will light up the Patriots secondary this week and opposing offenses will continue to do so throughout the season.