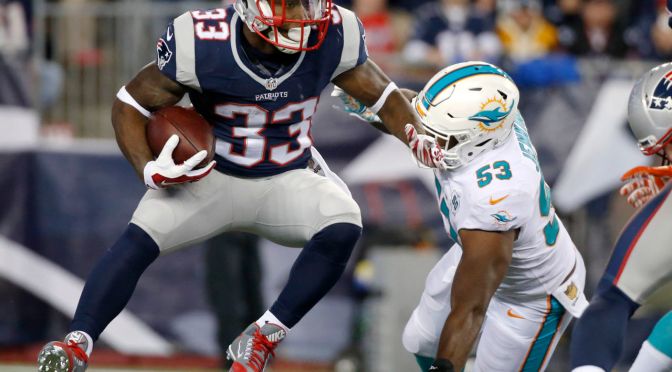 Another week, another divisional rival, another ass kicking by the hands of Belichick and the Patriots. Sitting seven rows up from the field on Thursday Night, I got to witness the Pats trouncing the Dolphins in primetime on short rest. Brady played the typical Brady game, throwing the ball with surgeon like precision, while the defense limited Miami to just seven points. The Patriots stayed relatively healthy as a result of the game, and will now prepare for the team from Washington to head to Gillette this Sunday. Unfortunately, we are now halfway through the NFL regular season. It’s a bit depressing isn’t it?

1) New England Patriots – Tom Brady said every good Halloween costume starts with a mustache. I wonder what Giselle thinks of it?

2) Denver Broncos – Manning still couldn’t find the end zone on Sunday Night, but neither could Aaron Rodgers. The Broncos and Patriots will both be undefeated when they play in four weeks.

3) Cincinnati Bengals – A ginger quarterback, a coach with no stones, and a starting corner back known for making it rain beat the Steelers on the road. This Bengals team has my respect, even though I despise them.

4) Carolina Panthers – Carolina will get their doors blown off at home on Sunday against Green Bay. They let a piss poor Colts team hang around like the kid who doesn’t fit in within a group of friends.

5) Green Bay Packers – Aaron Rodgers spent the bye week gazing into Randall Cobb’s misty blue eyes reading haikus, and not preparing for the Broncos. Don’t believe me, how does under 100 yards passing happen?

6) Arizona Cardinals – I don’t like coaches who wear kangols in press conferences and I am not buying what the Cardinals are selling. Let’s see the Cardinals beat someone of significance.

7) Seattle Seahawks – Has Pete and Russell recovered from what Malcolm Butler did to them in February? The offense is putrid and the defense played average against Matty Cassel.

8) Minnesota Vikings – Minnesota is winning football games without Adrian Peterson playing like Adrian Peterson. Maybe someone should start beating him with a switch as if he was American Pharaoh.

9) Atlanta Falcons – Matt Ryan has that deer in headlights look much like Sam Bradford. However, Ryan has a jersey that fits him, but he also lost to a terrible Tampa team.

10) New Jersey Giants – Tom Coughlin will lose part of his face mid-game before the season is out. #PrayForTomsFace

11) New Jersey Jets – Ryan Fitzpatrick can’t use that left thumb for the next few weeks. Yes, his wife may not be too happy with the injury.

12) Oakland Raiders – I’m happy for Raiders fans. Their team is run by a guy who wears a fanny pack and drives around in a mini-van fit for doomsday maniacs. They also beat the piss out of the Jets.

13) Philadelphia Eagles – Someone find Sam Bradford a jersey that fits him and Demarco Murray may end up like Lance from Varsity Blues before year end, if they keep running him out of the pistol.

14) Miami Dolphins – Miami has a true life bro for a coach. Sadly, that isn’t going to win them many football games.

16) St. Louis Rams – Todd Gurley is so filthy it hurts. The Rams still have Napoleon Dynamite as their quarterback, so that’s that.

17) Buffalo Bills – Buffalo had issues with their headsets because the batteries went dead. That is so Bills Mafia it hurts. A bye week for Buffalo may or may not help the morale in Orchard Park.

18) New Orleans Saints – Drew Brees threw for a million yards and half a million touchdowns on Sunday.

19) Indianapolis Colts– I’ve been blocked by Irsay and Kravitz since the start of the NFL season. The theory really is true that every team the Patriots have left in their wake, has become fit for a straight-jacket. Andrew Luck definitely hurt his vagina at some point this season,

20) Dallas Cowboys – Greg Hardy will probably power bomb Jason Garrett on the sideline at some point during the season.

21) Kansas City Chiefs – Eric Berry should clear some space for Comeback Player of the Year award on his mantle. This dude is an inspiration to all. I can’t even hate on the Chiefs.

22) San Diego Chargers– Can’t wait to see some of Hollywood’s finest in the owner’s suites in LA next year. Odds someone OD’s at the opener is at a solid 5/1.

23) Tampa Bay Buccaneers – The Bucs knocked me out of a suicide pool, and made half the Atlanta fan base go out and buy razor blades and rope after that loss on Sunday.

24) Cleveland Browns – Cleveland puked on themselves McNabb style two weeks ago against Denver. They also are missing their entire starting secondary.

25) Houston Texans – The Texans are contending, somehow, in the AFC South.

26) Baltimore Ravens – Justin Tucker is the MVP of the 2015 Ravens. No Ravens fans that is not something to be proud of.

27) Chicago Bears – The Bears had a week off to plan for AP and a surging Vikings team. How did Jay Cutler prepare for this? Taking the strap on from Kristen Cav and while keeping the Jim Caldwell face on the whole time.

29) Jacksonville Jaguars – Can we please get some sort of road trip down to Jacksonville just to hang in one of those pools? If Khan was smart, he would have brought portable ones to London and had Elizabeth Hurley, Kate Beckinsale, and Emma Watson dancing in them wearing crop top jerseys that said “Shaguars”.

30) Detroit Lions – The Lions went back to being the Lions again. Fat Face really didn’t do himself any favors for the millionth time in a row. I’m sure it was a long flight home from across the pond.

31) San Francisco 49ers – A shiny new stadium, piss poor grass, a coach who with a major case of EBS, and a quarterback who can’t throw is what Niners fans wake up to every damn day. God, it is good to be from New England.

32) Tennessee Titans – Someone has to be the worst team in the league, right?