Day one of New England Patriots training camp is officially in the books. Fans piled into the practice field stands and the famous hill, to watch their favorite team take the field for the first practice of the summer. Many fans most likely had a very tough time telling which players were which, because in typical Bill Belichick fashion he sent his players onto the field without jersey numbers. The only thing the casual fan could tell was that quarterbacks were in red, offense in gray shirts, and defense in blue shirts.

I was in attendance at practice, and because I spend too much learning every minute detail of these players, I did not have an overly tough time deciphering which players were which. Seeing how the players were in just shorts, t-shirts, and helmets there was virtually zero contact.

The lack of physicality made it very difficult for defensive players and offensive lineman to stand out. Therefore, I really limited myself to evaluating some of the skill position groups that were really on display. This meant predominately quarterbacks, wide receivers, and slightly tight ends and running backs.

The running backs that were out on the field today were Brandon Bolden, Travaris Cadet, Tyler Gaffney, Dion Lewis, and James White. When it came to first team reps with Tom Brady and company, Brandon Bolden received almost all of the snaps when the offense was in shot gun, (which was almost every snap).

Furthermore, in goal line drills, the Patriots lined up in the jumbo set with six offensive lineman, with Gronkowksi and Chandler on the end, and Jonas Gray running the ball behind James Develin in the, “I” formation. Jonas Gray was big to begin with, now he looks significantly thicker, and Josh McDaniels seems to be looking to get him involved in the passing game.

Patriots fans got their first glimpse of Tyler Gaffney today, and it was in a limited role. He received decent reps, but mostly just running the ball in simulated goal line situations. He also got some special teams work in.

The wide receivers were harder to tell apart. Obviously Julian Edelman and Danny Amendola are easy to tell apart, but players such as Josh Boyce, Brandon Gibson, and Chris Harper are not as easy. Amendola and Edelman looked impressive as always. Brady targeted Edelman more than any other receivers, connecting every time they attempted, with the exception of one post corner route in the back of the end zone, dropped by Edelman.

Both Aaron Dobson and Brian Tyms saw a lot of time on opposite sides of the field. Dobson was with Brady and the first team, and Tyms with Garoppolo and the second team. Garoppolo targeted Brian Tyms a total of six times throughout the day during team drills, going four for six, based on my observations, and as expected they were all fade routes and skinny posts. Dobson was on the field a lot with Brady, but the ball did not come his way very often.

At tight end, there are few words to say other than, Rob Gronkowski is a freak. He caught multiple passes in traffic from Tom Brady, the most impressive being a skinny post route in which he caught the ball while shaking off Tavon Wilson like he was nothing, and spiking the ball in the process. In addition, Jake Bequette did not impress at tight end. He has the physical stature to be a beastly blocking tight end, however he has stone hands, dropping passes on multiple occasions.

Quarterback was by the far the easiest position to evaluate, given the fact that there was only two quarterbacks on the field. Tom Brady impressed as he always does in training camp. His passes were pinpoint and he also showed a little bit of athleticism. Early on in practice Brady caught a fade in the corner of the end zone from Julian Edelman. Then later on he caught another pass down the sideline from Julian Edelman on a reverse pass, this time he only needed one hand. 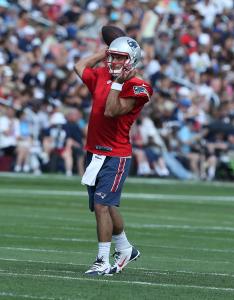 Many were probably expecting to see a slightly improved Jimmy Garoppolo from the one they had seen in December. If you went to Patriots training camp with these expectations, you left disappointed. His first pass of the day was an interception to rookie Matthew Wells or Jordan Richards. He simply can’t throw the ball down field and he seems to be afraid to even try it. Brady certainly does not have a cannon for an arm, but he makes decisions quickly and gets rid of the football. Jimmy panics when his first read is gone, looks around and then dumps it off to James White. If it were a real game situation he would be put in the turf fairly quick.

I hope to attend training camp more in the coming days, so stay tuned for more updates and analysis of the Patriots practices.