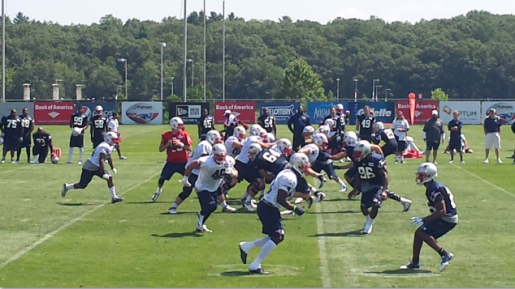 It is one of the callings of fall. The days are slowly getting shorter, the grass is freshly cut, and the man in the visor swinging his whistle ferociously, who is better known as the hoodie, is once again patrolling the practice fields of Foxborough. Patriots training camp is upon us. After a very tumultuous offseason in which the Patriots were under heavy fire most of the time, (even though they had just won the Super Bowl) it is time to strap on the pads, buckle up the chinstraps, and play some real football.

This year, more than in years past the Patriots have a plethora of question marks heading into training camp. Who is going to make up for Revis? How will they replace Wilfork? Is this the year Chandler Jones finally makes the leap? Position battles will highlight this summer, given the vast amount of starting roles up for grabs.

If you are going to training camp, you will realize that there is a bunch going on at once as the team breaks off into positional groups. Therefore, your probably thinking to yourself, what positions should I pay closest attention to? Well, here are the five most important positions to watch out for at Gillette this summer.

5. Quarterback: I trying my best to not mention, “deflate-gate” in this article, but I can’t get around it. There is a very good chance that Tom Brady will miss time early on in the season, so now more than ever Patriots fans need to evaluate the back up quarterbacks.

Personally, I will be watching Jimmy Garoppolo very intently. We need to see how he progressed over this offseason. The offseason between a players rookie season and their second season, is the most important of their career. Garoppolo was fully healthy, and I expect nothing less than vast improvement from what we saw in week seventeen last season against the Buffalo Bills.

In addition, Matt Flynn will battle with Garoppolo for the back up job. Many are sleeping on him, for good reason. He has never won a quarterback battle in training camp, and he has been apart of about three. Nevertheless, he was a very reliable back up for Aaron Rodgers in Green Bay, and always answered the bell when called upon.

4. Safety: The Patriots are now set for the next five seasons at free safety with Devin McCourty receiving an extension worth 47.5 million back in March. However, the safety spot opposite of him will be vastly important in 2015. In today’s NFL, you have to be prepared for passing situations on every down. The Patriots will certainly realize this early on in the season. With all the talented young players in the front seven, Bill Belichick maybe tempted to finally, “turn the dogs loose” up front.

Along with the weak secondary, opposing teams will want to throw the ball given these reasons. With teams throwing the ball non-stop the Patriots need another safety that can cover. That means Duron Harmon needs to have a big camp. Other than Harmon the rest of the safeties on the roster such as Tavon Wilson, Patrick Chung, and Nate Ebner are all tackle machines who can lay the boom, stop the run, and contribute on special teams.

None of the those players however can pass cover. Also, it should be interesting to watch second round pick Jordan Richards. I was not in the minority of being very skeptical of Bill Belichick for taking Richards that high in the draft. He seems like another Nate Ebner, which is all fine and well, but you can get that player in round five.

3. Running Back: No more Shane Vereen in New England, means it is time for a battle for the third down back role. One of the most important positions on the Patriots roster, because for a vast majority of the time your protecting Tom Brady. In my mind, the battle will come down to three players; Brandon Bolden, Travaris Cadet, and James White.

Last preseason, James White did not impress. He was soft and did not show that burst that he had in college at the University of Wisconsin. Travaris Cadet had a decent season in 2014 racking in thirty-eight receptions. Lastly, Brandon Bolden has seen little time at the third down back role, and when he did in 2013 he had a tough time getting on the same page as Tom Brady. 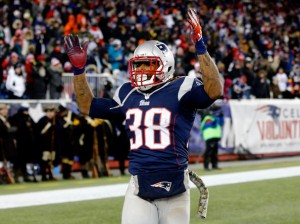 Bolden’s pass blocking ability is better than any other running back currently on the roster. That is what makes this battle an intriguing one. Which player can put all three phases together, Running the ball, catching the ball, and pass blocking. Personally, I am going with the hulk, Brandon Bolden. Why? He has the most experience in the offense, and two years is enough time to fix the deficiencies he showed in 2013.

2. Guard: With no more Dan Connolly, and Ryan Wendell recovering from a shoulder injury, Patriots offensive line coach Dave DeGuglielmo will be rotating his young guards around. Tre Jackson was drafted in the fourth round of this years draft along with Shaq Mason.

It would be better off for the Patriots to have a rookie take over the role of Dan Connolly, as oppose to players such as Josh Kline and Jordan Devey. They have proven time and time again that they can’t get the job done.

If neither Jackson or Mason can grasp the complex Patriots system, expect to see Marcus Cannon to slide over to guard. Lets hope we don’t have to see that. Don’t be surprised if there is a repeat of the offensive line debacle of last September this year.

1. Cornerback: Obvious choice here. No more Darrelle Revis, Brandon Browner, Alfonzo Dennard, or Kyle Arrington on the roster, thin would be putting it lightly when talking about the cornerback depth chart on the Patriots. What the Patriots need to do is rely on the few veterans they have right now. Tarell Brown and Bradley Fletcher.

I am in the minority, but I believe that Bradley Fletcher will bounce back and be a serviceable player. The real player to focus on is Malcolm Butler. A young player that shined in year one, and shined in the brightest moment. Can he finally break the trend of Patriots cornerbacks flopping in year two?

Darryl Roberts will also be a player to keep an eye on. He is a seventh round rookie that looks to have the physicality of a player like Brandon Browner. Logan Ryan will receive a ton of reps as well, however he has also proven he can’t fill the cleats. He is targeted immediately when he is on the field.