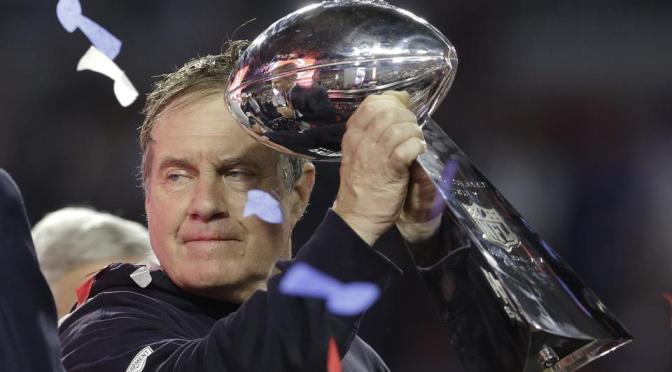 PANIC…HELL NO, THIS TEAM WILL BE READY

Most fans in the NFL would be concerned if their team (you mean fans don’t own the team…say it ain’t so) had half the turnover the New England Patriots have had this off-season, but not the Foxboro faithful. They know what New England has accomplished since Bill Belichick took over as Head Coach.

After going 5-11 his first year (2000 in case you forgot) they haven’t had a losing season. If you are wondering how many other teams can say they have gone 14 years without a losing record, the list is short. Zero!

Through those years this team, under his tutelage, has thrived on controversy. Heck, when he came from the Jets there was controversy. Do you remember how he wrote his resignation from the hated rivals on a piece of paper, stating simply “I resign as HC of the NYJ.” just one day after accepting the position. At that time most Pats fans didn’t welcome him with open arms!

Things haven’t calmed down since. Let’s face it, Belichick uses controversy/pressure as one of his many motivators. He loves the pressure it puts on players because he knows it will ultimately make them stronger when the chips are down. If it doesn’t happen naturally, he creates it (think Lawyer Malloy, Ty Law, Logan Mankins, etc. etc. etc.).

Controversy over “deflate-gate” has become so big that we tend to forget that just one week earlier, Ravens’ Head Coach John Harbaugh accused the Pats of a “substitution trick” that was “clearly deception” when Baltimore lost to New England 35-31.

Forgive me my ignorance, but I thought deception was the name of the game and having a Head Coach who actually knows the rules was an advantage. Although what the Pats did was within the rules (lining up just four offensive linemen and declaring a normally eligible receiver as ineligible), non Patriot fans, which are many, jumped on the bandwagon and the word “cheaters” was once again attached to the franchise. Losers are always looking for a scapegoat and the Patriots are easy…they just win too darned much!

So, as the Patriots prepare for another winning season (do you doubt it will be?) we have the usual turmoil.

Many media “experts” are ready to write this team off, or, at least not a legitimate Super Bowl contender, which is just what the greatest coach in NFL history wants. National Football League beware, the Patriots are once again going into a season as underdogs…and they love it.

So, relax everyone. Enjoy all the hullabaloo. The 2015 season is just around the corner and, as you know, YOUR New England Patriots will do just fine…you know “the Hoodie” has a plan

One thought on “New England Patriots: No Panic In Patriot Nation”