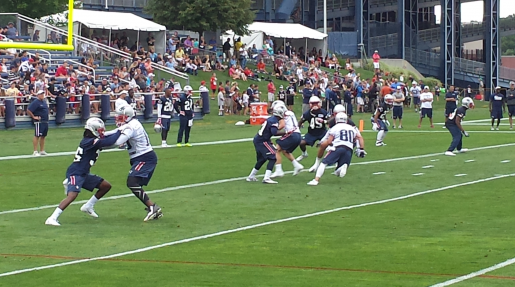 After eleven seasons of patrolling the middle of the Patriots defense, Vince Wilfork has taken his talents to Houston to play under former defensive coordinator Romeo Crenell.

With his departure the Patriots are now left with a literal huge hole to fill at the nose tackle position. There will be plenty of competition during training camp this summer and two players that will be going at it for a starting role will be Malcom Brown and Sealver Siliga.

Going into his rookie season, Malcom Brown will have a huge transition period this year. At only twenty-one years old, Brown will be one of the league’s youngest players.

Brown is extremely strong and much like Vince Wilfork applies pressure in the backfield by pushing the guard backward into the running backs.

Brown doesn’t get after the quarterback so much, but he does collapse the pocket well with his extreme size. Bill Belichick is not afraid to start a rookie if they can grasp the system. How well he adapts will determine whether or not he becomes a starter as a rookie.

Sealver Siliga has been a nice surprise since he joined the Patriots in 2013. At 6-2, 325 pounds Siliga takes up a ton of space in the middle of the defense. He is very difficult to move, which makes it difficult for other teams to run up the middle.

Many believe that Siliga can take over the role of Vince Wilfork. It would be very difficult due to the fact that Big Vince is much more athletic and quick on his feet. Siliga is very statue-like in the center.

What has derailed Siliga’s career thus far has been injuries. He spent of last season on temporary injured reserve. If he stays healthy throughout the summer, he will more than likely be the starter come week one. However, that is a monumental if.

In conclusion, rookie first-round selection Malcom Brown will most likely be the starter at nose tackle come week one against the Pittsburgh Steelers.

The reasoning for this is because Brown seems to have all the raw talent and maturity players need to succeed at the pro level. Siliga should be able to take over the position, but once again his inability to stay on the field and his ability to stay accountable will hurt his chances.