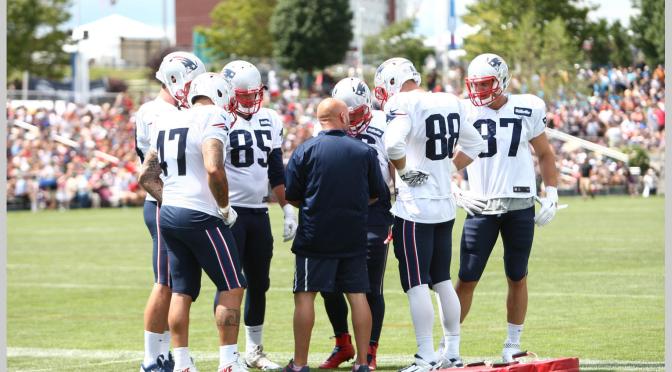 In the very beginning of the 2013 Patriots off season, Patriots fans were absolutely delighted with their dual tight ends of terror, Rob Gronkowski and Aaron Hernandez. Few in the league can match up with Rob Gronkowski’s versatility at tight end. Gronkowski is able to block and catch, a rarity in this day and age. Aaron Hernandez was lauded for his speed and pass catching ability. Hernandez could still block well while exhibiting the traits of a starwideout.

Hernandez and Gronk presented such a match up nightmare that many in New England figured that it would only be a matter of time before the famed tight ends led the Patriots back to Super Bowl glory. Aaron Hernandez of course, chose a different path in 2013. Rather than a Super Bowl berth, Aaron took to murdering his friend Odin Lloyd and spending his life in prison. The New England Patriots of course won a fourth Lombardi Trophy but the once lauded tight end duo did not arrive to Arizona intact.

The shock of losing Hernandez, especially in New England’s first days of a Wes Welker-less  season, was intolerable. Left in Hernandez’s stead were several untested rookies, an ailing Rob Gronkowski and a seemingly promising young tight end named Zach Sudfeld. As the season began, Sudfeld’s promise never materialized and before you could say “practice squad” the Jets scooped him up off the waiver wire and all but confirmed his doomed fate.

In 2014 the Patriots in a shocking move traded offensive lineman Logan Mankins for a fourth round draft pick and tight end from the Tampa Bay Buccaneers, Tim Wright. Although many fans lamented the loss of Mankins there was still a considerable buzz in the air for the prospect of having another viable pass-catching tight end. As the season progressed Wright did a serviceable job but was hardly as dynamic as Hernandez had been during his pre incarceration days on the Patriots team.

Tim Wright would show that he was worth picking up, pulling in six touchdowns for the New England Patriots during the 2014 season enroute to an eventual Super Bowl victory. Sadly, Wright was released by the Patriots in June of this year and was resigned, oddly enough, by the Tampa Bay Buccaneers.
It’s now the start of a new football year and fans are once again clamoring for the now defending New England Patriots to take the field. In an off season filled with deflated footballs, corner back departures and the very real possibility of four games without future Hall of Fame quarterback Tom Brady, did a very real solution to an almost forgotten problem slip under the radar? During free agency the New England Patriots signed what could eventually be the perfect compliment to star tight end Rob Gronkowski. He is now known as No. 88, Scott Chandler and is New England’s best offseason value pickup.

At a height of 6 feet 7 inches and weighing in at roughly 260 pounds, Scott Chandler could very well be the answer all Patriots nation has been waiting for. Chandler brings power and pass catching ability and another wild card to the offense. With both he and Rob Gronkowski on field defenses will constantly be guessing, who is blocking and who is catching? When Scott was with the Buffalo Bills he was often referred to as a “Patriot killer”, routinely making plays and scoring touchdowns over New England’s defense. Coach Bill Belichick is clearly familiar with his upside and was eager to add him to the Patriot’s roster.

Scott Chandler isn’t all roses and confetti. Scott isn’t known for his speed and when compared to Hernandez he lacks the overall versatility the once acclaimed murderer was known for. Chandler is currently nursing a minor knee injury which has unfortunately kept him off the field for much of the preseason, giving the fans very little to see.
Ultimately, time will tell if Scott Chandler will become the missing link to a problem yet to be solved. If injuries do not keep him from reaching his full potential, the New England Patriots may very well once again be living in the high-rise section of Tight End City.