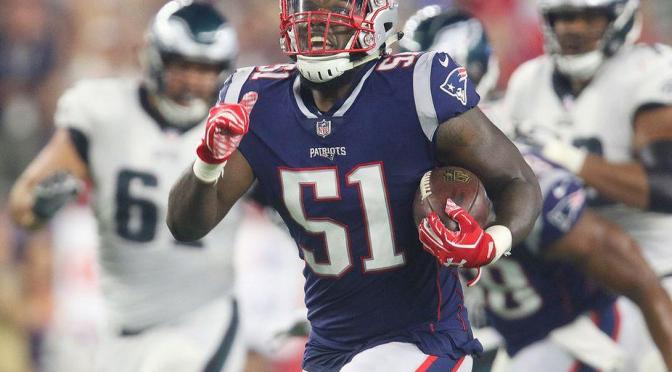 No surprised here with only Brady and Hoyer making the roster at quarterback. Etling hasn’t shown near enough to be considered for a spot on the roster, but would expect the Patriots to keep Etling around on the practice squad if no one else claims him.

Another position group with no real surprises. At this point the biggest question at the running back position is the health of first round pick Sony Michel, who hasn’t practiced in about two weeks with a knee injury. Jeremy Hill has far outplayed Mike Gillislee in the first two preseason games and looks deserving of a roster spot.

This is the weakest wide receiving core the Patriots have had in some time. Outside of Chris Hogan and Matthew Slater, who is used mostly on special teams, there is no real lock for anyone else to make the roster with Edelman suspended for the first four weeks of the season. Dorsett was on the team last year and has gotten reps with the first team during the preseason and would expect to make the team. Patterson has shown some flashes on offense, as well as offers value in special teams as a returner. The last receiver spot will likely come down to Eric Decker or Kenny Britt. Decker has struggled in the preseason and training camp, but I give him the edge over Britt due to the fact that Britt hasn’t been able to get on the field due to injuries. Devin Lucien, Braxton Berrios and Riley McCarron are names to watch for who could make a push for a roster spot during the final two preseason games.

No real surprises here as I believe all three of these players are locks to make the roster. The only way I could see this changing would be if the Patriots want to save money and get rid of Dwayne Allen and his $5 million salary and cap hit.

The loss of first round pick Isaiah Wynn hurts the depth of the offensive line group, as it was beginning to look like Wynn was going to contribute early for the Patriots. Trent Brown has looked phenomenal so far and looks like he could be an upgrade to Nate Solder, who the Patriots lost in free agency. I believe the first seven guys listed are locks as they were all members of the team last year outside of Brown. Ulrick John has looked decent in limited action so far in the preseason and offers flexibility being able to play at tackle and the interior of the offensive line. Guys like Cole Croston and Luke Bowanko could be in play for the final offensive lineman spot.

Clayborn, Rivers and Wise have all played really well so far in preseason and throughout training camp and are all locks to make the roster, as well as Trey Flowers. Keionta Davis is someone who Belichick seems to like and has spoken very highly of. Davis played a lot in the Patriots second preseason game against the Philadelphia Eagles, and did a good job of generating pressure. Davis has the flexibility to play inside and outside and generate pressure from both, and has an opportunity to be a name people wouldn’t expect to make the 53-man roster.

Shelton has looked great so far this summer and looks to be a big contributor to the Patriots defense. Both Shelton and Brown are in the final year of their contracts and look to have big years. Both Butler and Guy played well last year and offer flexibility being able to play all over the defensive line, with Butler being more of a pass rusher and Guy more of a run stopper. Vincent Valentine is currently on the roster bubble and could push someone like Keionta Davis off the roster.

Hightower and Van Noy were obvious locks going into the season and have played well in limited action so far. The name of the preseason Ja’Whaun Bentley also looks like a lock after playing fantastic in the Patriots two preseason games so far, has been all over the field and returned a fumble for a touchdown against the Eagles. Bentley has been getting reps with the first team defense and if he continues to improve and translate his preseason success to the regular season will be a big contributor to the Patriots defense. Flowers and Roberts have been apart of the Patriots defense and expect them to make the team, as well as King who is used on special teams.

The Patriots have a lot of bodies at the cornerback position and could go in many different ways. Jason McCourty was a big name acquisition this offseason but so far his play hasn’t translated to the buzz around him going into camp, and got beat badly on a touchdown last week against the Eagles. I expect him to stick around but am beginning to question the impact and role he could play. I think the real question comes with Jonathan Jones and Cyrus Jones, both who started off on the PUP list . Jonathan Jones played well last year as the teams primary slot corner before being injured, and then the team selected Duke Dawson in the second round of the NFL Draft, who was primarily a slot corner in college and has looked good in training camp so far and has been dealing with a small injury himself. Cyrus Jones was terrible on defense and special teams his rookie year, then missed his second year after tearing his ACL. I think it would be too early to move on from Cyrus after only seeing what he could do for one year really.

McCourty, Chung, and Harmon are all locks and key members of the Patriots defense, as well as Ebner being a lock as a core member of the special teams. Eddie Pleasant has played decently in the first two preseason games, and I just absolutely hate Jordan Richards and will not give him a spot on my projection. So congrats Eddie Pleasant for not being Jordan Richards.

No surprises here as this has been the core the past few years and haven’t seen much out of Corey Bojorquez.

The start to Patriots Training Camp is finally almost upon us as it is set to start in just under a week. One of the biggest issues the Patriots had at times last year was at defensive line, most notably in the Super Bowl where they couldn’t generate any pressure on Eagles quarterback Nick Foles, as well as being unable to stop the Eagles in the running game. The Patriots will return some of their main core on the defensive line, such as Trey Flowers, Malcolm Brown, and Deatrich Wise Jr., as welcome in a few new faces.

One of the new names that people should expect to see a lot from this season is defensive end Adrian Clayborn. Clayborn signed a two-year, $10 million deal with the Patriots this offseason after spending the previous three seasons in Atlanta. In 2017 Clayborn finished with a career-high 9.5 sacks, and while that total looks good on the surface it’s worth noting that six of his sacks came in one game going against the Dallas Cowboys and backup left tackle Chaz Green. A former first-round pick Clayborn is a player who so far has not lived up to his full potential and hype around him following his career at Iowa, partly due to playing in three games or less in two of his four seasons while in Tampa Bay due to injury. If Clayborn can stay on the field and continue to build off maybe his best season as a pro in last season I would expect him to be a big contributor on the Patriots defensive line opposite Trey Flowers.

Another new face that should make a big impact on the defensive line this season is Danny Shelton, whom the he Patriots acquired in a trade with the Cleveland Browns this offseason. Shelton is a former 12th overall pick in the NFL Draft by the Browns, the same draft where the Patriots selected Malcolm Brown in the first round.

Both Brown and Shelton are true run stuffing defensive tackles and while Shelton had a down year in 2017, Brown is coming off his best year as a member of the Patriots in 2017. Having two big defensive tackles in Brown and Shelton in the middle of your line with a combination of Flowers, Wise, Clayborn, Lawrence Guy, and Derek Rivers as edge rushers, as well as having Vincent Valentine and Adam Butler to play in the middle,  gives the Patriots lots of flexibility on all three downs and in all types of situations. If players are able to stay healthy and play up to their potential this Patriots defensive line is one that offers tons of flexibility and can cause problems for opposing offenses.