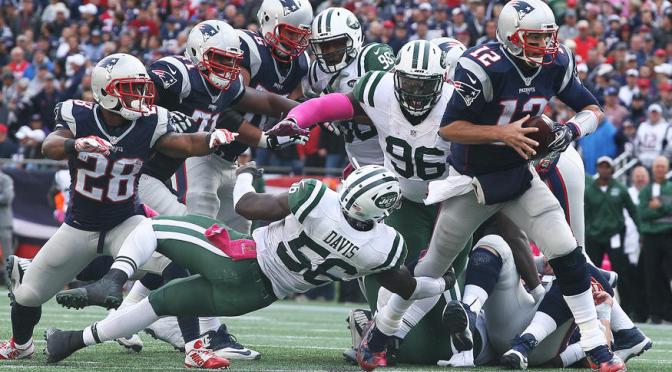 Let’s start with stating the obvious, Tom Brady is not from this planet. He is a real life “Superman.” 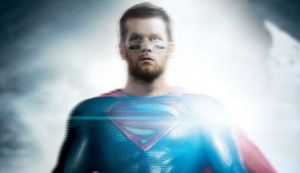 After Sunday’s 30-23 win over the New York Jets even the most skeptical Brady hater has to be in awe of the unhuman things he is doing in his 16th year as an NFL Quarterback. Brady literally took the team on his back and refused to lose. We all knew he didn’t need any help in passing the ball, but:

C’mon fans of the Steelers, Jets, Colts, Ravens (and on and on and on), admit it, you have to respect what this man has done. I know you may not be willing to admit anything publicly. Deep inside you still think he had to be cheating to do what he has, otherwise you’d have to admit your team actually lost to a “human” and you don’t want to do that. Among your fellow fans, when you belly up to the bar, you still mock him and talk about deflated footballs.

But when you take a moment and are honest with yourself you would love to have Tom Brady QB your team. You know it…I know it…and, don’t feel bad, your team feels the same way.

Is Tom Brady better now than he has ever been?

You can click on the above green link to find and compare Brady’s career statistics and decide for yourself. So, the question is, what more can he do? What is left to challenge the greatest QB in the history of the NFL (that will trigger some debate)? Commissioner Roger Goodell and NFL owners provided the motivation he needed -or maybe he didn’t – to rejuvenate him for the 2015 season by questioning his honesty and integrity. His response has been to quietly embarrass them and their position. Hell, even the most avid Patriot fan has to admit he has surpassed any expectations we had for this season. Think about it:

With a mobility in the pocket that he has never shown before he looks like a “new” Tom Brady.  Don’t get me wrong, he has always been great, but this year he has moved into a new stratosphere. It’s not hyperbole, it is a fact and the eye test backs it up. Game-by-game he meets and exceeds expectations.

Brady brings out the best of everyone around him

Please don’t tell me he doesn’t have the weapons that other great QBs have. It doesn’t take anything away from what Mr. Brady has done this year to acknowledge the greatness of Rob Gronkowski (or Randy Moss in 2007). Julian Edelman and the now healthy Danny Amendola aren’t anything to laugh at, and Dion Lewis has emerged as a top tier running back/receiver.

However, with that said, Brady makes everyone on the offense look better. The ensemble that makes up the offensive line attests to what he is capable of doing. If you can name the starting five linemen for last night’s match-up with the amazing pass rush of the rejuvenated Miami Dolphins without looking it up, congratulations.

Credit the quick release (fastest in the NFL) of Tom Brady with the fact we’re not in panic as each weeks latest super team lines up on the other side of the ball. Speaking of which, I don’t know about you, but I’m tired of hearing how all these teams are suddenly able to “challenge” the Patriots dominance in the NFL. Before they can challenge they have to show they can beat the best…and so far no one has done that.