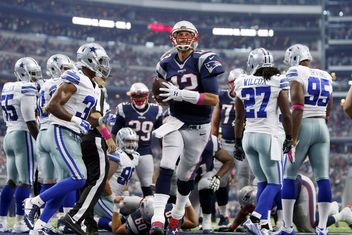 Let’s face it, no team likes to lose (breaking news – how’s that for a major announcement)…but most teams seem to hate it more when they lose to the despised New England Patriots. It seems every time someone loses to the Pats, and it happens pretty often, there is an excuse other than they just got beat by a better team.

After Sunday’s blowout in Dallas (yeah, I know, everyone in Texas is hurt or the Cowboys would have won) I got to wondering about the top excuses teams have used, and, some that we may hear before the season ends. So here goes:

Top Excuses For Losing To The Patriots

So, there you have it – 10 excuses to start you thinking. I’ll bet you can come up with more, so let’s hear them in the comments section. Odds are we’ll hear one of the above or something unique thought up by the Colts ownership after Sunday’s revenge game in Indy.

Remember, the game is supposed to be fun…so enjoy it, no matter what excuse the opposing team gives for losing. Hey, the Super Bowl Champion New England Patriots are your team, and it has been a great ride.

2 thoughts on “New England Patriots: Top Excuses For Losing To The Patriots”