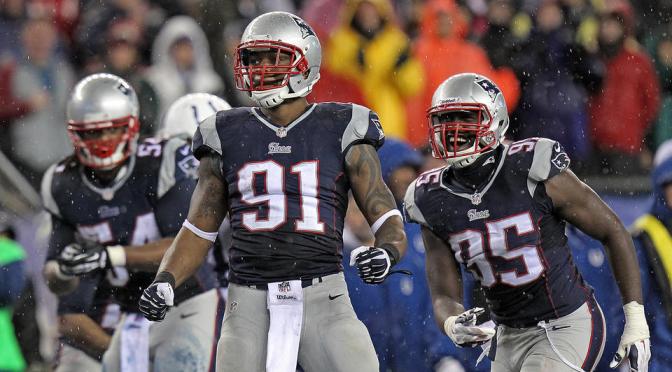 In the 2012 NFL Draft, Bill Belichick drafted two players in the first round in Chandler Jones out of Syracuse, (21st overall) and Dont’a Hightower out of Alabama, (25th overall). One year later Belichick drafted Jamie Collins out of Southern Mississippi in the second round, (52nd overall). Those three players have now become the heart and soul of the Patriots front seven, and really the defense as a whole.

You can easily go back and fourth as to who is the most important, or who is the best out of the three. Collins brings ridiculous athleticism and solid coverage skills for an outside linebacker. Hightower is a physical presence and is the true, “thumper” on the Patriots defense, he can come off the edge and plug up the middle in the run game. Chandler Jones has been the Patriots best edge rusher since he was drafted by the team in 2012.

The three have been a very valuable trio the past two seasons, but of course all good things must come to an end at some point. After this season Dont’a Hightower and Chandler Jones have options both around 7.8 million dollars for the 2016 season. The team exercised the their fifth year options at the end of April, which now gives them the option as to whether or not they want them to become free agents in 2016. Jamie Collins’s contract is up after 2016.

It is very obvious that the team will not be able to hold onto all three players. That begs the question, which ones are going to go? You can make the case for any of the three, but the obvious choice is Chandler Jones. It is not entirely because he is the least effective of the three, but because he cannot bring to the table what Hightower and Collins can.

It is largely due in part to Chandler Jones not being able to adjust to Bill Belichick’s ever changing defensive scheme. When used in a 4-3 defense, Jones has been effective at getting to the quarterback off the edge. However, he has struggled to stay healthy at that spot in the past. When asked to play with his hand in the turf in a 3-4 scheme, Jones has been pushed around because of his lack of size. This season he has gotten significantly bigger in his upper body and has been able to hold his ground. Nevertheless, we will see how long that holds up.

Furthermore, pass rushing defensive ends are a rarer commodity in the National Football League in today’s game, and when there is a decent one available, desperate teams will throw all sorts of money at them. The Patriots are not one of those desperate teams. Bill Belichick has proven that he can get by without that elite pass rusher that Patriots fans have been craving for.

An elite linebacker, which Dont’a Hightower is, and what Jamie Collins could be, are a slightly cheaper commodity than pass rushers. Bill Belichick and Matt Patricia have built Collins and Hightower into the centerpieces of the Patriots defense, because they compliment each other so perfectly. They can’t risk losing either of them, but they can survive without the couple of sacks and missed games that Chandler Jones has each year.

One thought on “Jamie Collins, Dont’a Hightower, Chandler Jones: Who’s Got To Go?”