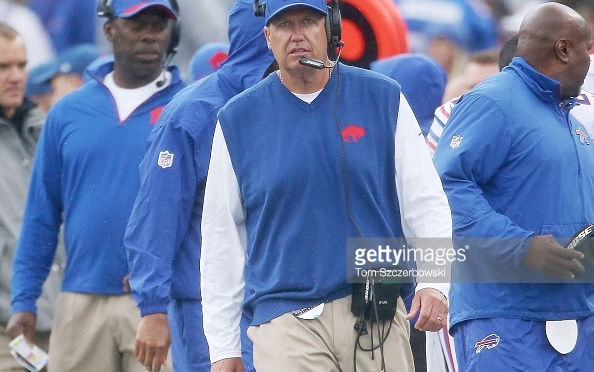 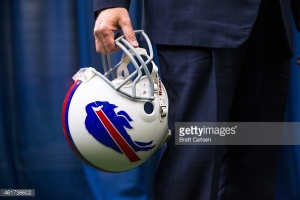 Since 2001, the Buffalo Bills have a long history of being the New England Patriots’ two additional Bi-weeks in the AFC East. Occasionally the Bills give The Patriots a challenge and on five separate occasions have actually beaten the Super Bowl Champions during the Tom Brady era. The Bills were even seen celebrating as though they had won the Super Bowl last year when they were able to defeat the Patriots practice squad during the meaningless season finale of 2014. Yes, its typically a safe bet that the Buffalo Bills will always struggle to compete with New England’s gridiron gang.

Last season head coach of the New York Jet’s, Rex Ryan, was finally driven out of Gotham in favor of Todd Bowles.  Ryan had been a fixture in New York for six years with his brash and often boisterous demeanor winning over the Jet’s fan base and the players alike. Rex initially excited many Jet’s fans with his cocky attitude because after the long forgotten Super Bowl winning year of “Broadway” Joe Namath, the Jets never really had anything to ever get excited about. Immediately taking aim at the king pins of the AFC East, Rex was quick to point out that “I am not here to kiss anybody’s rings” when discussing Bill Belichick and the dominant New England Patriots.

Initially, Ryan had quite a bit of success with the New York Jets. Led by an all star defense with the likes of linebacker Bart Scott, center Nick Mangold and superstar cornerback, Darrelle Revis and an offense led by rookie sensation Mark Sanchez, the Jets defeated the Patriots in their first meeting 16-9. What was most impressive by that victory is that the Patriots did not even score a touchdown.
The New York Jets made it all the way to the 2009 AFC Championship that year losing to the Peyton Manning led Indianapolis Colts. In 2010 The New York Jets continued their winning ways splitting wins with Patriots during the season and in the playoffs defeating both Peyton Manning and Tom Brady on their home turf to once again make it to the AFC Championship. Although the Jets once again looked poised to make a run at the Super Bowl, the Pittsburgh Steelers promptly put a stop to those plans. With two straight AFC championship appearances, it looked as those New York had finally had its hero that could end the reign of the New England Patriot dominance of the AFC East.

For the New York Jets and Rex Ryan this story would of course not have a happy ending. After 2010, the Jets were never able to make it back to playoff contention and amidst injuries, Butt Fumbles and Quarterback controversies became the joke of the NFL. Meanwhile, their lowly brethren in Buffalo were slowly stock piling defensive pieces like Defensive end Mario Williams and Defensive tackle Kyle Williams. After drafting promising rookie wide receiver Sammy Watkins in 2014, the Bills were a decent quarterback and coach combo away from being a legitimate threat to the AFC east.
In a perfect storm of convenience, Rex Ryan found himself in need of a team just as Buffalo head coach Doug Marrone vacated his position. At first it was widely believed that Rex was holding out for the Atlanta Falcons head coaching job, but the defensive guru swerved us all and ended up as head coach for the offensively impotent Buffalo Bills. 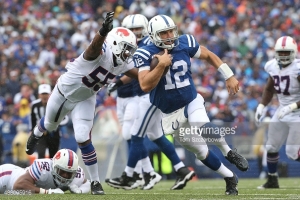 With the offensive additions of the always disgruntled wide receiver Percy Harvin and star running back LeSean McCoy, the once languishing Buffalo Bills have begun to look like a formidable opponent for the first time in many years. What about a quarterback? Currently Buffalo boasts three; five year NFL journeyman, Tyrod Taylor, 2013 first round draft pick, EJ Manuel and one time Tom Brady back up, Matt Cassel. Let’s be clear, none of these men are in the same category as a Tom Brady, Peyton Manning or Aaron Rodgers but it would be foolish to dismiss the victory Buffalo scored on Sunday by decimating early Super Bowl favorite, Indianapolis Colts, 27 – 14.

With the help of possibly the best defense in the NFL, Tyrod Taylor proved capable during his Buffalo debut under center. With the impressive showing Rex Ryan’s defense displayed it is quite possible he may finally have the Patriots number come this Sunday. Is a stellar defense, a coach with proven past success and and a serviceable quarterback enough to stop the reigning, defending Super Bowl champions? Nobody can say for certain , but let’s just say it is not 2009 anymore.

One thought on “Billseye: Is Rex Ryan Buffalo’s White Knight?”