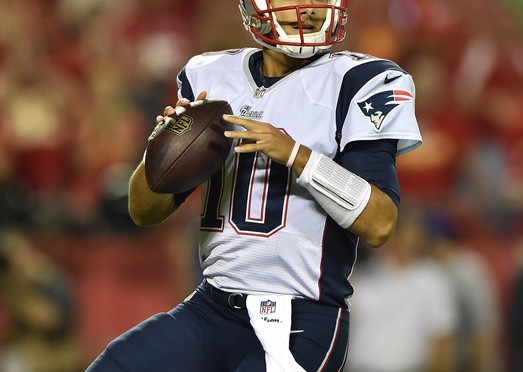 Jimmy Garoppolo’s strong play has made him into a viable NFL starter and will be starting in the 2016 season, but not for the Patriots.

Garoppolo was selected in the 2nd round of the 2014 NFL draft and was thought by some to be Tom Brady’s future successor at quarterback in New England. Garoppolo had a strong preseason his rookie year in 2014 but of course was no threat to Brady. Jimmy G was then put into the game in a blowout loss against the Chiefs where he performed well at the end of the game. The media hype grew even more on Garoppolo with some people saying that Tom Brady was done and that it was Garoppolo’s time to become the starting quarterback in New England. Garoppolo then struggled in the season finale against the Buffalo Bills going up against one of the top defenses in the NFL with a cast of backup players playing for New England.

After the harsh criticism of Brady by some members of the media he went on to have a fantastic rest of 2015 season and of course went on to win his fourth Super Bowl ring. And now with the never-ending “DeflateGate” scandal, Garoppolo may be the Patriots starting quarterback for the first four weeks of the regular season. Garoppolo has played well this preseason after a very inconsistent week one against the Green Bay Packers and has led two comeback victories in the preseason, improving his game each week.

I hated the pick of Garoppolo at the time and even with his improved play still do not see Garoppolo as Brady’s successor and the future quarterback of the Patriots. Though I do not see him as the future quarterback of the Patriots I think Garoppolo could be a good quarterback in the NFL and that he is currently probably better than a few starting quarterbacks on other teams and looks better than quarterbacks such as Blake Bortles and Johnny Manziel, who were selected before him in the 2014 draft. With New England losing a first round pick in the 2016 NFL draft it could make sense for the team to move Jimmy G for either an early second round pick in the 2016 draft and even potentially a first rounder in 2017. Brady and Garoppolo’s contracts both expire after the 2017 season. If Brady is still playing at a high level the Patriots would have a tough decision to make on who to re-sign if both were willing to re-sign with New England. Garoppolo may not be willing to re-sign after being a backup for four season and may look to go else where and if that’s the case why not attempt to move Garoppolo at a time when you are low on draft picks. New England may not move him during this season and don’t need to, but moving him after the season would be smart to do. They could trade him to a quarterback needy team like Houston or Cleveland who could have high second round picks which could be almost equivalent to the first rounder New England lost or a first rounder for the following year.

Garoppolo could be a starter in the NFL sooner rather than later and I think he will be a full time starter in 2016, but it won’t be for the Patriots.