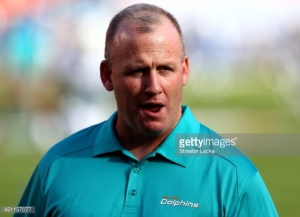 Ted Wells, the “independent” investigator who has become famous/infamous for his report which led to star quarterback Tom Brady’s four-game suspension, is under fire from another former member of the AFC East. Former Miami Dolphins offensive line coach Jim Turner is suing Wells over his report done on the Dolphin’s bullying scandal a year ago. The report eventually led to Turner being fired.

The scandal occurred mainly between guard Richie Incognito and tackle Jonathan Martin. Incognito was accused of bullying/harassing Martin constantly in the locker room. Turner claims that Wells falsely accused him of creating an environment that allowed bullying and harassment to occur even though Wells knew this was false. Turner also alleges that the NFL hired Wells and his law firm to essentially find a few individuals to blame, while they were well-paid and well-positioned for future NFL cases, as has become evident with Well’s role in Deflategate.

Richie Incognito came out hard against Wells recently as well, saying, “I just think it’s bogus, the whole system in how it’s set up with Roger and the complete, absolute power he has. He has so much power and he hires independent investigators who are obviously not independent. They come in with an agenda and they come in looking to find facts to back up their argument. All the facts are slanted in their favor. Ted Wells came in with a mission against me. Ted Wells came in slanted against me and everything in his report was slanted against me. There were some things in there that would have helped my cause that were left out, [like] teammate testimony, stuff like that. You see that in Brady’s case. There’s a lot of stuff that got left out. There’s a lot of misinformation.”

It’s certainly understandable why Incognito would be so outspoken. The guard was suspended the final eight games of the 2013 season after the bullying scandal, and was a free agent for the entire 2014 season before the Buffalo Bills signed him in February. Turner was fired by the Dolphins in the wake of Well’s report on the issue, and has been unable to find another job in the NFL since. He believes the report has negatively and unfairly affected his reputation and ability to find work since, and possibly forever.

This is now the second instance where a federal lawsuit calls into question whether or not Ted Wells truly worked as an independent investigator for Roger Goodell and the NFL. This is also a big portion of Tom Brady’s lawsuit against the NFL involving Deflategate. As the old saying goes, once is an accident, twice is a trend, three times is a problem. While this is only the second time, it certainly reflects badly on both Ted Wells and the NFL.