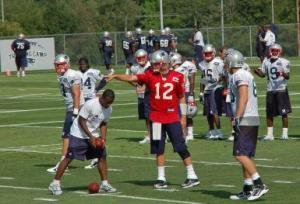 Training Camp has begun and with it, comes the injuries. As of August 8th, 24 out of the 90 players on the roster are missing practice due to health/rehab issues. So, with that, we get to see more unknown players get more reps and show why they should wear a Patriots uniform come September. Here are some players to keep an eye on as the Packers game approaches on the 12th.

RBs Jonas Gray and Tyler Gaffney: With incumbent RB LaGarrette Blount spraining his MCL and missing Game 1 against Pittsburgh with a suspension, the backup running back position is something that really needs more attention. Gray had that 4 TD game against Indianapolis last year and did nothing else and Gaffney was hurt all last year. Seeing that James White, Dion Lewis and Travaris Cadet are battling for the “Vereen” Role, we need to figure out who can be the road grater for whomever is playing Quarterback. Both Gray and Gaffney are likely fighting for one roster spot, so this is something to look for.

TE Jake Bequette: As Bequette pretty much washed out as a defensive end, the former 3rd round pick was moved to TE this offseason and has been a pleasant surprise in camp. He’s been stretching the field and catching the ball well. With this size (6’5, 275) and quickness (4.07 shuttle and 6.90 three cone drill at his Pro Day in 2013), he could be an intriguing player to watch. Obviously, he is still a big project, but definitely someone to keep an eye on.

G/C Josh Kline: One of the biggest areas of uncertainty is at Guard. With rookies Tre Jackson and Shaq Mason starting together the other day, you still have the void left by not resigning Dan Connolly (and then his subsequent retirement). Kline is a guy who has appeared in 21 games, starting 6 starts (one in the AFC Championship against Indianapolis) since joining the Patriots as an undrafted free agent out of Kent State in 2013. He has the ability to play all interior spots, and could be a surprise starter at one of the guard spots if he plays well enough. With Ryan Wendell on the PUP, Kline will see more reps and could come out ahead as a starter or top reserve.

DE/OLB Eric Martin: After bouncing around the Saints and Browns rosters in 2013 and 2014, Martin signed to the Pats Practice Squad last year. At 6’2, 250, he ran a 4.53 at his Nebraska Pro Day in 2013. He has raised some eye brows with his pass rush. He could make noise as Dane Fletcher and Chris White are on the PUP as a good special teamer/backup pass rusher. Keep an eye out on how he does with the pads on.

S Tavon Wilson and Jordan Richards: Although the attention has been on the corner back (and rightfully so), the attention needs to be on how well these two have played as of late. Both are getting a lot of playing time and surprisingly enough, Wilson has been a better player. Will he remove his borderline bust status as a 2nd rounder? We’ll see, but it’s an encouraging sign. With that being said, hearing good things about Richards makes it interesting to see if guys like Duron Harmon and Nate Ebner get put on notice with their play.

One thought on “New England Patriots: Players to watch heading into the Packers Game”