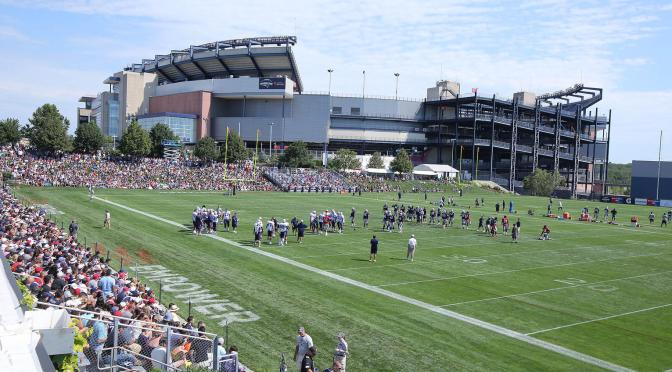 Day number three of New England Patriots training camp has come and gone, and now the real football has begun. Saturday marked the first time that the team has worn full pads during practice, which could only mean one thing, contact! Of course since the new Collective bargaining agreement came out in 2011, the amount of hitting teams can do in practice is limited, but there was certainly still some popping in Foxborough on Saturday morning. Here are my three biggest takeaways and observations from day three of camp.

1. Blount and Easley Back In Action: On Saturday morning, media members and fans were delighted to see the return of both LeGarrette Blount and Dominique Easley to the practice field. After failing his conditioning test on Wednesday, Blount had to spend the following days getting himself in shape so he could get on the field and help his team.

It was evident that Josh McDaniels wasn’t going to just hand Blount all the reps, he had to capitalize when he had them. When it came down to it, he did capitalize. He doesn’t look like he has missed a step at all since we saw him in February. During a drill in which a linebacker had to cover a running back one on one on a passing pattern, Blount made a phenomenal move on Jamie Collins leaving him in the dust as he reeled in a catch from Tom Brady down the sideline. In addition, during goal line drills, Blount showed his power once again plowing through the defense into the end zone. Although, he was stopped on his second attempt by rookie first-rounder Malcom Brown.

There was a report on Friday, stating the Patriots coaching staff was going to be cautious with Dominique Easley. This did not appear to be the case on Saturday as Easley was full go. Even though he was mostly phased out of first team reps by veteran Antonio Johnson, Easley did impress during interior lineman three on three drills. The drill was simulated with a center, guard, and tackle going up against two defensive lineman and a linebacker. Easley really gave it to un-drafted rookie center David Andrews during the drill. The two were really going at it, that could stem from their Georgia versus Florida college rivalry days.

Rookie Offensive Lineman Jumping Right Onto First Team: With the left guard position wide open, and with Ryan Wendell still on the physically unable to perform list, rookie guards Shaq Mason and Tre Jackson have been able to see plenty of action over the past three days. Many believed that Jackson would have the best chance at the starting job based on his size, but Shaq Mason was the one that really stood out on day three.

Mason was in the left guard spot during live team drills, and he stood his ground giving up zero sacks of Tom Brady. Furthermore, during the interior lineman drill period, Mason made a fantastic cut block on veteran linebacker Jonathan Freeny, taking his feet from right up under him.

Miscellaneous Notes: The story with the quarterbacks was very much similar to what it was on Thursday when I was at training camp. Tom Brady took the majority of the reps with the first team with a little Jimmy Garoppolo mixed in. Brady was borderline flawless, and Garoppolo still needs to make quicker decisions. Brady went seven of ten during seven on seven drills, and a perfect twelve for twelve during live team action. Garoppolo also went seven for ten, and seven for nine during team action.

The defensive back group continues to put things together with some bumps in the road, as expected. The two quarterbacks for the most part carved up the secondary. Nevertheless, there was some bright spots on Saturday. Logan Ryan shined by breaking up multiple passes from Tom Brady. That is key because Ryan is the most experienced corner in the Patriots system, which is scary. Second round safety Jordan Richards also continues to impress the doubters.

On Thursday he had a very nice interception of Jimmy Garoppolo, and today he made a great play by knocking the ball out of Scott Chandler’s hands in a one on one drill. The 6-7 Chandler towers over 5-11 Richards.

Lastly, the play of the day for me had to go to one Aaron Dobson. During one of the seven on seven periods, Dobson made an outstanding grab on a post corner route from Tom Brady, over former college teammate Darryl Roberts, who was all over him.

I will also be in attendance at day four of Patriots training camp, so stay tuned for more updates.