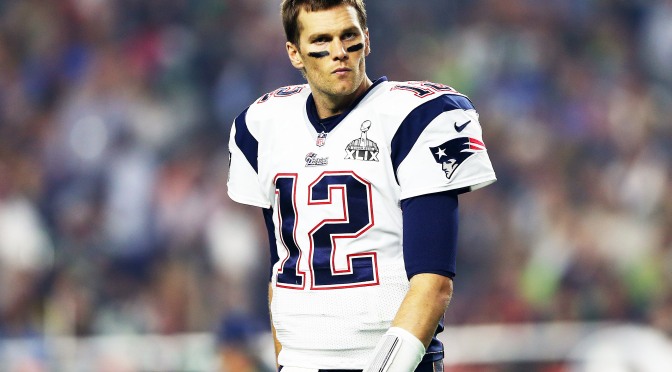 The verdict is in, and the Ginger Hammer strikes again!

A decision that should’ve brought out the duck boats on Boylston street again has left all of Patriots Nation in a state of upheaval.

I can’t imagine that any of you can find a silver lining to what has unfolded in the past few hours, but I have one. At least you’re not in Miami, listening to incessant rants from delusional Dolphins fans who are banking on the Harvard College Sports Analysis Collective’s Super Bowl 50 predictions (not to mention the humidity, which makes you feel like you’re a walking fried egg).

The fate of Deflategate, or “Deflatefate” is currently a four-game suspension for the four-time Super Bowl Champion Tom Brady. Let me be the first to point out that I am in no way looking to berate the league or its commissioner, however, I have read the Final Decision and the evidence Goodell finds sufficient enough to arrive to this conclusion, and I’m still inconclusive here.

Let’s begin with what the report claims as “the most significant new information” – a destroyed cellphone.

Tom Brady admitted to having his assistant destroy a cellphone he had been using since November 2014 at his appeal hearing in June. It is presumed (because NOWHERE in this report can an exact date be determined) that this was deliberately done “on or around” March 6th, the day the Patriots quarterback met with Ted Wells, the independent investigator hired by the league. During the appeal, Brady’s representatives presented a letter from the destroyed phone’s carrier indicating that text messages sent to and received by this phone could not be retrieved, but offered to devise a spreadsheet of all the individuals he had contact with from November 2014 – March 2015.

So, if the league cannot access phone records for a phone that was presumably destroyed, how can they estimate that around 10,000 text messages were sent during that time period?

The intention of devising a spreadsheet that includes all of the individuals Brady had contact with during that time period was for the league to use it at their will (you know, contact these individuals, receive their consent and review their phone records for any evidence). But of course, the league decided this was not practical. The most significant new information is really no information at all then. Brady was tampering with evidence and obstructing the investigation? How can that be proven when you can’t even bother to try an alternative method of obtaining information that can potentially substantiate a 139-page report that concludes “more probable than not” manipulation of footballs?

The report continues with a section called “Factual Determination and Findings” where for the millionth time we are reminded of what the weight of the footballs should be. Pop quiz: How many pounds per square inch should an NFL football weigh in order to be used in a game? (If you didn’t answer 12.5 to 13.5 psi, you must be a Dolphins fan.)

Tom Brady informed his equipment staff he preferred the footballs to be inflated at the “lowest permissible level” and was even gracious enough to have the equipment staff present a “highlighted copy of the provision of the Playing Rules” to game officials. What happens after that cannot be proven to implicate the three-time Super Bowl MVP.
Another factor that played into Goodell’s decision was the fact that neither John Jastremski nor James McNally were called to testify during the appeal in June. The report indicates that there were important topics that could’ve have been addressed, particularly text messages where McNally refers to himself as “The Deflator”.

Wait, that and those other important topics that needed to be addressed were kept out of that infamous 139-page report?

Goodell concludes that the evidence in these reports support the idea that Brady was involved in an elaborate scheme to tamper with footballs after they had been inspected by game officials and obstructed the investigation by destroying his phone. He drew “upon his experience of more than thirty years in the National Football League, including nearly nine as a Commissioner.”

Did he draw upon his extensive experience in the NFL when he initially suspended Ray Rice for two games after he brutally beat his wife unconscious on camera?

Did he also draw upon his extensive experience in the NFL when he reduced Le’Veon Bell’s suspension to two games after he was arrested and charged with a DUI and possession of marijuana?

Look, there’s no denying that rules were broken here. Brady was appealing the punishment itself and it was upheld after more than six months of investigation that still fail to prove that he DEFINITELY played a role in this ridiculous scandal. So if this is sending any message to the league’s teams, players and fans, it’s one that implicates that the man at the helm’s judgement is deflated. (Too soon?)