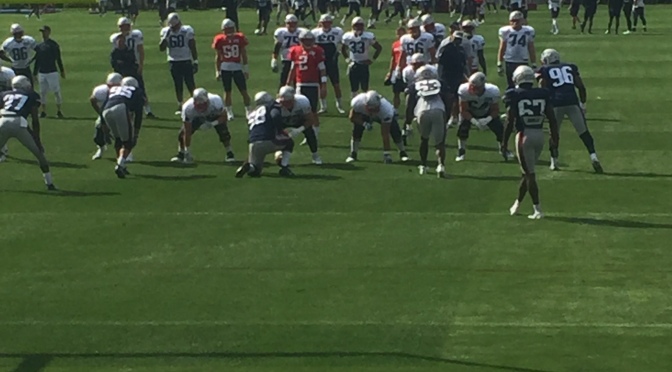 Today was day three of Patriots training camp and the first day where players were allowed to be in full pads and make contact. While today’s session was less physical and fast paced as previous years there were several players and areas that stood out.

Defensive backs Duron Harmon and Ryan Lewis both had very good days with Lewis making several nice pass breakups in the beginning parts of the day. Harmon had a good first two days of camp and continued to build on that today picking off Brian Hoyer in the end zone, which in a game situation likely would have been a pick six, as well as intercepting a pass from Tom Brady in the back of the end zone that was intended for tight end Rob Gronkowski. These sessions were far from perfect as both the entire offense and defense ended up taking a lap for mistakes, as well as rookie running back Sony Michel taking a solo lap for a fumble down towards the goal line. All three quarterbacks were not sharp today as rookie Danny Etling struggled for the majority of practice, and Brady and Hoyer throwing the aforementioned interceptions. 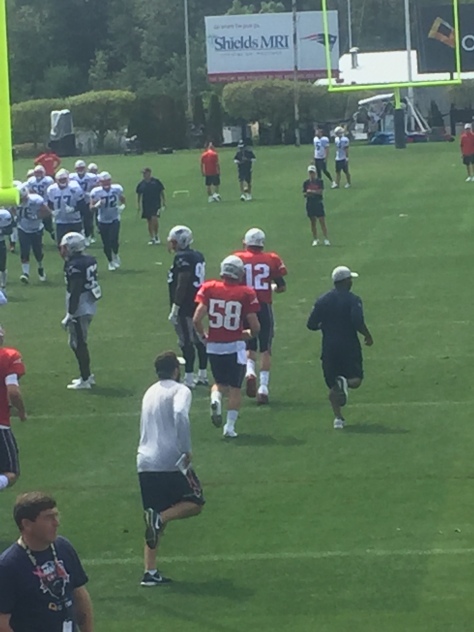 One thing that really stood out to me today was the play of the Patriots wide receiving corps. This is an area where the team has a lot of questions with heading into the season, which is a problem the team hasn’t had in several years. Earlier this week I discussed how the battle at wide receiver is one that is going to be interesting to watch, and over the first three days of training camp that stands true. Devin Lucien made maybe the play of training camp so far making a tremendous catch in the end zone over a heavily contested Jason McCourty and made sure to drag both feet down before falling out of bounds. Offseason acquisitions Jordan Matthews and Cordarrelle Patterson both had very good days of camp working with both Tom Brady and Brian Hoyer. Patterson made a very nice catch in the end zone from Brady during 11 on 11 drills, and Matthews got some good work in with Brady making several sideline catches during 11 on 11 drills and seems to be looking more comfortable with Brady and the offense. Riley McCarron also had a nice day at camp making some catches and showing off his route running ability. With Julian Edelman suspended the first four games of the season the Patriots are going to be looking for guys to step up in his absence, and I’m looking forward to seeing all of these guys more throughout training camp and the preseason to see who will win out a spot on the final 53-man roster and potentially make a big impact this season. 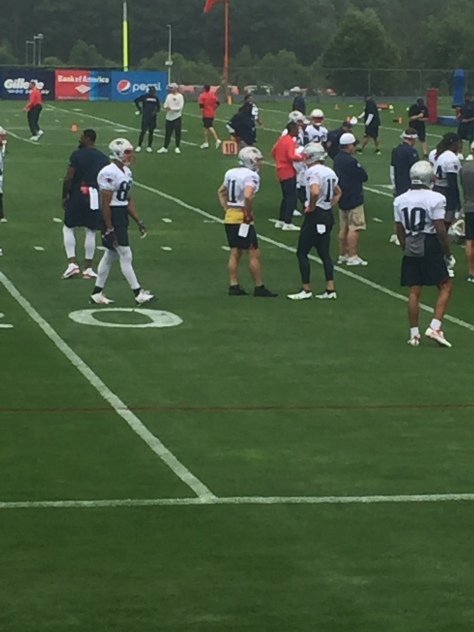 Other guys who had good practices today were Trent Brown and Deatrich Wise Jr.. Brown has been starting at left tackle the first three days of camp, but with no contact the first two days was tough to get a true read on how he and all the lineman on both sides of the ball were looking. Brown did a great job of setting the edge on both running and passing plays and looks to be fitting in to his new role at left tackle quite nicely. Wise made some nice plays throughout the day, including a play where he absolutely crushed running back Jeremy Hill. Wise has had a good three days of camp so far and looks to improve on his good rookie season and take on a bigger role in the Patriots defense.

Late during the practice session defensive end Trey Flowers left the field after a big hit during a goal line play. Flowers stayed on the ground for a few seconds before getting back on his feet. A few players grabbed him by his face mask and looked into his face, from where I was sitting looked like they were looking for possible concussion signs. Flowers went off to the sideline and took his helmet off and talked with trainers before jogging off the field, and later reported that he suffered a cut on his face and had a towel covering his eye while jogging off the field, which is a much better sign than any possible concussion symptoms if that is indeed the case.

W’re only three days into camp and will be a lot more to see and watch for as physicality and level of intensity picks up over the next few weeks.