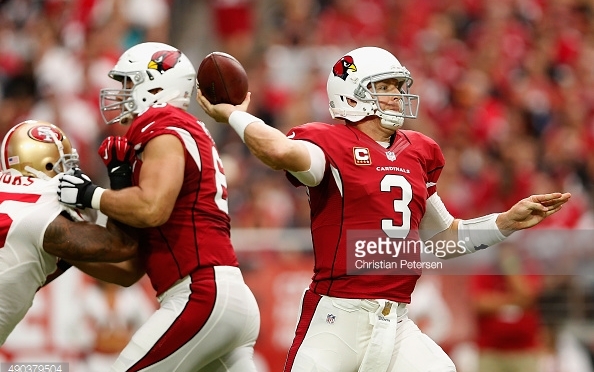 Week three is in the books and has brought its share of surprises. There were more major injuries, and somehow backup quarterbacks put up some pretty good numbers. Let’s review week three with five things we learned from last week’s games

1) Carson Palmer and Larry Fitzgerald have been amazing

Who knew that two aged veterans would still be able to put up huge numbers? This week Carson Palmer and Larry Fitzgerald continued to put up video game numbers as the Arizona Cardinals pounded the San Francisco 49ers 47-7. Palmer went 20/32 for 311 yards and two touchdown passes. Through three weeks Palmer has thrown for 803 yards, nine touchdowns to only two interceptions. Fitzgerald had nine catches for 134 yards. It was his second straight game where he had more than 100 yards receiving. To put that in perspective, Fitzgerald had only two games where he past 100 yards receiving last season.  With the Cardinals standing at 3-0, Palmer and Fitzgerald are lights out in the twilight of their careers.

On the other hand, the San Francisco 49ers were on the receiving end of the 47-7 blowout against the Cardinals. Kaepernick was horrendous. Kaepernick went 9/19 for 67 yards. He threw for no touchdowns, but threw four interceptions. Two of those interceptions were returned for touchdowns. Those two pick-6s happened in six minutes into the first quarter. The only bright spot of Kaepernick’s performance was a 12-yard touchdown run. There needs to be some change in San Francisco. No, I’m not saying that the 49ers should start Gabbert, because that is even worse, but the 49ers and Kaepernick need to find ways to improve. Kaepernick’s play through the first three games have been largely inconsistent. In their week one victory, Kaepernick went 17/26 for a dismal 165 yards and no touchdowns. Then in a week two blowout loss, He went 33/46 for 335 yards and two touchdowns. Then this trash performance happened. Whatever happened to the Kaepernick that took the league by storm during San Francisco’s Super Bowl run in 2012? The 49ers and Kaepernick need to find away to get back to that, or else it is going to be a long season.

Who knew we would be saying this, but the Oakland Raiders are winning and competitive? Weird, I know. After being blown out 33-13 to the Cincinnati Bengals, the Raiders have turned around, all thanks to Derek Carr and Amari Cooper. With them lighting up on offense, the Raiders have pulled victories over the Baltimore Ravens and Cleveland Browns. Carr has thrown for 726 yards and five touchdowns on the season, and Amari Cooper leads the team with 290 yards receiving. Latavius Murray has provided additional help with 248 yards on the ground. On the defensive side of things, they’ve provided clutch stops. Standing at 2-1 and their great play, the Raiders look like they can compete for a playoff spot in the AFC. And no, I’m not kidding.

4) Who your backup quarterback is matters

Week three had teams start notable backups in place of their starting quarterbacks due to injury. With Tony Romo out for 8 weeks, the Dallas Cowboys started Brandon Weeden in a 39-28 loss where the Cowboys blew the lead in the 2nd half. Yes, Weeden went 22/26 for 232 yards, but don’t let the numbers fool you.  Almost all of Weeden’s passes were short or dumpoffs, and very few if any deep balls. Weeden threw an interception when he was flushed out of the pocket trying to throw downfield. Weeden did not throw a touchdown as the Cowboys run game led by Joseph Randle carried the offense. But the run game is not enough to win the game, especially since your franchise quarterback and best wide receiver are out for extended periods of time. Weeden is 5-17 as a starter, something that should trouble the Cowboys. Going to the southeast, The New Orleans Saints started Luke McCown in place of an injured Drew Brees in a 27-22 loss to the Carolina Panthers.  Again, don’t be fooled by the 31/38 for 310 yards statline. Many of those passes were short, even if he averaged 8.2 yards a pass. And like Weeden, choked the game away by throwing an interception. McCown is also 2-8 as a starter, a stat that should worry the Saints if Brees is out longer than we think. Up in Pittsburgh, the Steelers must deal with losing Ben Roethlisberger for 4-6 weeks due to a sprained MCL and bruised bone, and must start Michael Vick, who seems to be way past his prime. Like it or not, backup quarterbacks matter in the NFL, and you’re fortunate if you have a good one. By the way, we could be looking at a Weeden versus McCown matchup on Sunday Night Football, great.

This year, the NFL changed the rules to make extra points be kicked from the 15 yard line to make them an impact on the game. This rule change has made it’s impact and has affected the outcome of games. Before, extra points were automatic, with only 8 being missed throughout the whole 2014 season. This season, through only three games, we’ve past that number at 14. This affects games as what should have been a one possession game, has become a two possession game because of a missed extra point. Instead of going for the “automatic” choice of the extra point, more teams are leaning towards the closer two point conversions. But those are not automatic either. Because of this rule change, what a team does after scoring a touchdown has become more intriguing.