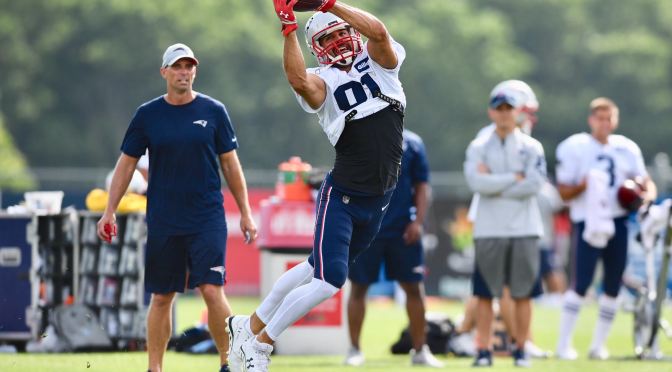 As the first preseason game approaches, teams are starting to get a grasp of what they have on their roster and what positions need addressing. For Bill Belichick, it seems as though he is now on the same page as his fan base in realizing that his wide receiver depth chart is paper thin. With the releases of Jordan Matthews and Malcolm Mitchell in the past week, signing one or multiple receivers needed to be a priority for Bill Belichick and he did so by signing veteran Eric Decker.

The #Patriots signed FA WR Eric Decker to a 1-year deal worth $1.9M, source said, with a chance to make up to $2.5M (based on receptions). He’s on the field today for his first practice.

I like this move a lot because it is perfect for what they need right now. They offered a long-time receiver who has had a lot of success in the league a chance to make another NFL roster.

I just say to take some precaution, because a lot of fans are taking this signing as the complete fix to the wide receiver issue. The way the contract is set up does not even guarantee Decker a spot on the 53-man roster come week one.

Eric Decker’s one-year contract with the Patriots includes just $75K in guaranteed money (his signing bonus). His base salary is $950K, with the chance to make up to $2.1M max through bonuses and incentives.

$75K guaranteed is nothing in today’s NFL. It is essentially compensation for a tryout. How long that tryout lasts is up to Bill Belichick and whether or not he believes Decker has anything left in the tank, because his stats over the past two years certainly show signs of a decline.

In 2016 Decker suffered a shoulder injury early on that caused him to miss all but three games, and last year in Tennessee he had a decent year for a number two or three receiver with 54 receptions, for 563 yards, and one touchdown. He did have a decent game against the Patriots in the divisional round racking up six receptions, for 85-yards. In Foxborough, he would need to be the number one receiver for at least the first four weeks given the lack of talent on the current roster.

Chris Hogan is not a number one receiver and should not be expected to play like one. He was signed as a third or fourth option and has had the talent around him to be that since he has been in New England.

Personally, I would love if Belichick took a flyer on Dez Bryant. Yes he is a head case, but you can get him on a cheaper contract, probably with more guaranteed dollars than Decker, and the reward would be far higher, because when he was at his best four-years ago he was the best receiver in the league.