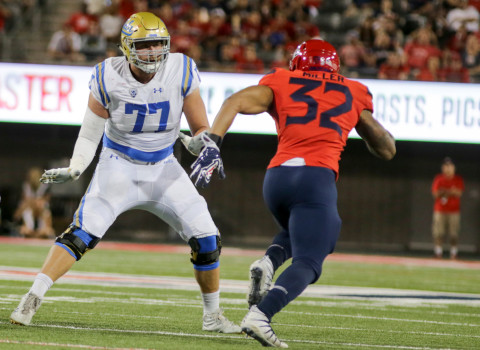 The Patriots have lost some key contributors from their 2017 team in the early stages of the NFL offseason so far in players such as Nate Solder, Dion Lewis, Malcolm Butler and Danny Amendola; and could still lose several other contributors as the offseason goes on.

This seven round mock draft was conducted on FanSpeak.com using their mock draft simulator.  Some players may be ranked higher in some rankings and projections then were taken in this mock draft.

Following the departure of left tackle Nate Solder tackle immediately becomes one of the biggest needs for the Patriots, as they could still also lose both LaAdrian Waddle and Cameron Fleming to free agency. Miller can step in right away and protect the blindside of quarterback Tom Brady. Miller has good size and arm length similar to Solder which will help him defend speed rushers off the edge. The Patriots added tackle Matt Tobin in free agency who as part of an abysmal Seattle Seahawks offensive line last season, and drafted Tony Garcia last year in the third round who missed his whole rookie season due to blood clots. Garcia’s status and health is currently unknown and Miller can step in and start right away.

The Patriots linebacking core was terrible in 2017. The Patriots will benefit heavily from getting Dont’a Hightower back from injury in 2018, but is someone the Patriots can not rely on to stay healthy. Vander Esch has very good size at 6’4 250lbs which will allow him to play both inside and outside in the NFL, but projects best as in inside linebacker in the NFL. Vander Esch can be a great compliment to Hightower and also gives the Patriots insurance at linebacker if Hightower misses time again in the future and is a big improvement over guys like Elandon Roberts, Marquis Flowers and Kyle Van Noy.

While I believe that Rob Gronkowski will return to the Patriots for 2018 his status is currently unknown. Even if Andrews returns he is an improvement from Jacob Hollister and Dwayne Allen, who still could be released from the Patriots and save the team $5 million in cap space, as well as be a nice compliment to Gronkowski in the passing game, Andrews has great size and was a big red zone threat during his time at Oklahoma. Andrews weakness is that he isn’t a great blocker and is primarily just a pass catcher on offense. Because of this the Patriots could look to keep Allen even if they draft Andrews, who is a great blocking tight end but was practically invisible in the passing game last season.

Carter has great size at 6’6 250lbs for an edge rusher and had a very good showing at the NFL Combine running a 4.50 40 yard dash. Edge Rusher is a need for the Patriots but I don’t put it at the top of lists for things they need. Trey Flowers had a good season last year and rookie Deatrich Wise showed signs of promise. The Patriots will also get back Derek Rivers who missed his entire rookie season last year after tearing his ACL in training camp, and I expect the team to bring back James Harrison on a veterans minimum deal. The team has also signed defensive end Adrian Clayborne to a two-year deal. Carter will have time to learn and fill out his frame more as well as be able to contribute as a pass rusher on third downs for the Patriots and give the team another nice piece to have for the future.

Cornerback looked to be a big need for the Patriots after Malcolm Butler signed with the Tennessee Titans and the Patriots missed out on top guys on the market such as Aqib Talib and Richard Sherman. The Patriots then made a call to their farm system the Cleveland Browns to acquire Jason McCourty before the team released him. McFadden has good size at 6’2 and has very good ball skills. McFadden could use more time to develop and cornerback isn’t a big need for the Patriots right now with Stephon Gilmore, Jason McCourty, Eric Rowe, Jonathan Jones and Cyrus Jones on the roster but could look to add another corner in the draft.

Samuels seems like a player that the Patriots would value and love. During his time at N.C. State Samuels spent time at running back, fullback, wide receiver and tight end. His versatility on offense is something that Bill Belichick would fall in love with. These rankings had him listed as a running back, but other rankings have him listed as a tight end so it’s tough to project what position he will play in the NFL, if he’d even have a true defined position. With the losses of Amendola and Lewis someone like Samuels could have value and step into numerous roles in the Patriots offense, or spend time on the practice squad and work on developing a defined position rather than being a Swiss army knife on offense.

It wouldn’t surprise me in the slightest if the Patriots didn’t address the Quarterback position at all in this years draft. It also wouldn’t surprise me at all if they took someone they liked earlier on in the draft. Right now you have to think that Tom Brady has at least three more years left and Brian Hoyer is a more than capable backup QB. The Patriots met with Litton at the NFL Combine and seems to be someone they could have some interest in if they do want to address the quarterback position in the draft, but as of right now they have other holes and needs to fill.