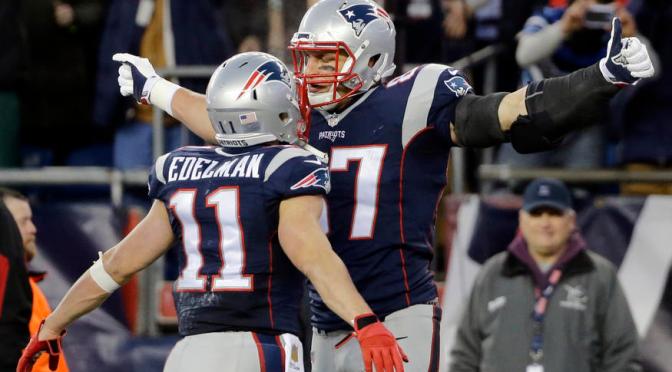 Since last Wednesday when NFL free agency, “officially” started, a large majority of Patriots fans have been progressively losing their collective minds. “Why didn’t they get Forte! They need a deep threat! Why isn’t Bill doing anything, I hate that their so cheap they never sign talent!” Those are just some of the statements that have been floated around Patriots Nation over the past half-week, and it truly has become a yearly event during the Bill Belichick era.

Patriots fans should take a page out of Aaron Rodger’s playbook on this one and just, “RELAX”. Not very often does Bill Belichick open up the checkbook and start signing players left and right during free agency like the Miami Dolphins or the Jacksonville Jaguars. Spending big time in free agency isn’t always a good thing. You can look like the Super Bowl champions in March, but then when actual games are played teams start to realize that they have left themselves flawed in other positions.

ESPN stats and information tweeted out a graphic last week in which they showed the teams that have spent the most money over the past ten years. The Miami Dolphins topped the list at 629 million dollars spent over the past ten years, and in those ten years they have only made the playoffs once. Miami was followed in the top six by teams such as Jacksonville, Philadelphia, Washington, Tampa Bay, and Cleveland.

Even in years when the Patriots have, “spent big” they have still signed players to team friendly deals. Randy Moss was acquired via trade and was basically on a one-year deal, and in 2014 Darrelle Revis was signed also to virtually a one-year contract friendly to the team. They don’t spend, plain and simple and they continuously are in the AFC Championship.

The crazy thing about Patriots fans clambering for moves right now is that a month ago when the season ended, fans were pretty content with the roster. The only important player that had a contract that was up is Akiem Hicks (signed with Chicago). The defense is young, and besides a solid second corner there really aren’t any positions of need on that side of the ball. On offense, the offensive line could use some depth but that wasn’t expected to be addressed in free agency, but more than likely in the draft. A running back and wide receiver were needed.

The team addressed the wide receiver spot with Chris Hogan out of Buffalo. As a Patriots fan I am content with that signing. I understand that Marvin Jones and Mohammed Sanu are more flashy names that would have been better additions, but for the money they received it wouldn’t have been logically to pay them that highly to be a third option. Chris Hogan is more than capable of doing what Brandon LaFell did in 2014, and that is all the team needs him to do.

At running back I can understand the frustration because they so desperately need a back who can consistently carry the ball. Matt Forte however didn’t seem to be a fit. Sure he can run the ball, but he is more known as a pass catching back, and the Patriots already have their fair share of those with Dion Lewis and James White. Many don’t think Dion Lewis will come back and be the same player, and I find that to be a bit ludicrous. ACL tears are not as serious as they once were.

We have seen the likes of Adrian Peterson and Rob Gronkowski come back and be very productive the following seasons. I am setting the bar high for Lewis coming back. Again, the draft may be a better option for running back. Derrick Henry is the name that has been floated around the most. He is a big, “bell cow back” that can be developed and be exactly what they need. Just brining back LeGarrette Blount is not the answer.

The Patriots right now as currently constituted still makes them the best team in the AFC, especially with Martavis Bryant of Pittsburgh being suspended for all of next season. The Patriots defense is getting to the point where they are almost on par with the Patriots offense, which could make them dangerous. Therefore, staying put may not have been the worst thing through the first wave of free agency.