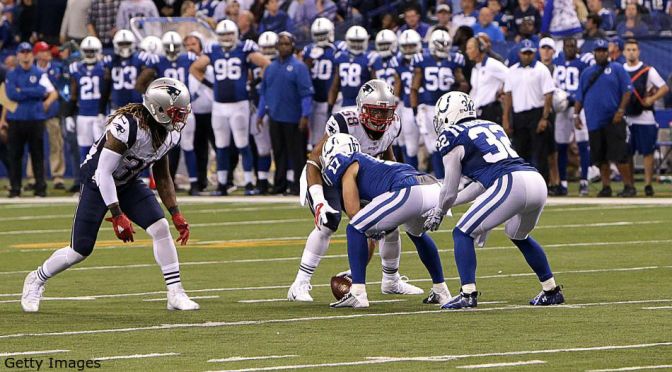 Let’s be honest, the Sunday night match-up between the New England Patriots and the Indianapolis Colts didn’t go as planned.

It was because…are you ready?…the Colts thought it was already Halloween and decided it was going to be “trick” not “treat” night at Lucas Oil Stadium.

There were ghosts, goblins, witches and lots of tricks

New England returned the favor with an 80 yard drive of their own, culminating withJulian Edelman scoring his fourth receiving TD of the season, knotting the game at 7-7

Things settled down for a while before the witches stepped in and put a hex on Edelman, causing him to injure his finger and start dropping passes. The most damaging drop occurring in the 2nd quarter, when a Tom Brady pass bounced off #11’s hands into the waiting arms of Mike Adams, who scampered 14 yards down the sidelines to give the Colts a 14-10 lead.

The pass was Brady’s 1st interception of the year, but the blame fell squarely on those damned witches as they made the perfect pass bounce off the usually sure hands of the hexed Edelman.

At this point the Goblins entered the head of Indy Head Chuck Pagano. As visions of sugar plums danced in his head, oh wait a minute…back-up, that’s Christmas. Thinking this was time to spring surprise #1 of the game, the infamous on-side kick, Pagano and his special teams coach went for it.

It was just the 2nd quarter, but surely this would surprise New England Head Coach Bill Belichick. As the ball squirted from hand to hand before falling under the prone body of Patriot Josh Kline it looked like the greased pig contest we’ve all seen at the State Fair. As bodies un-piled the officials took the still inflated ball and loudly proclaimed “New England’s Ball.”

Pagano was in shock. My God, how could that be, he thought, as his head spun (kinda like in the movie The Exorcist). Knowing exactly what to do, he grabbed the red flag from his sock and hurled it on the field to challenge the play.  “Upon further review their was no clear view of the fumble recovery, therefore the initial call stands” blared through the PA system.

The Colts scored another TD and the Patriots a last second field goal as the hectic half ended 21-20 and everyone took a deep breath…and believe me, they would need it.

The Play Of The Game

The Colts kicked off to start the second half and Rob Gronkowski scored his first TD in the last 3 games to put New England up 27-21. With the same score and 1:14 left in the 3rd quarter the Colts went to a play that makes the Seahawks Super Bowl loss pass look a great call. And here it is in all it’s glory:
Possibly The Worst Play In NFL History?

You have to give Pagano credit, per Ian O’Connor, ESPN Senior Writer, after the game he said “I take full responsibility for that,” as if he had any other choice.

As far as the Patriots being unprepared for either that play, or the earlier onside kick, here is Coach Belichick’s post-game response “We expected this to be a gadget game in the kicking game,” The man has his team prepared for almost everything, yet other coaches continue to try to trick plays that look foolish.

After the Colts scored their final TD with 1:26 left in the game the Halloween Theme continued when Patriots LB Jamie Collins had the most athletic play of the game…with a little help from the ghosts of games past. Check it out. If you look real closely, you’ll see them pushing him up and over on this extra point attempt http://www.nfl.com/videos/nfl-cant-miss-plays/0ap3000000560794/Can-t-Miss-Play-Collins-hurdles-line-and-blocks-PAT

Right about now Colts fans are spouting the line “it was a moral victory”…or “we gave them the game”. No matter what, one thing is obvious…the , oops, Indianapolis Colts were running scared even though they held the lead at halftime 21-20. Play calling was in respect for what the Patriots could do and in fear of what the night would bring.