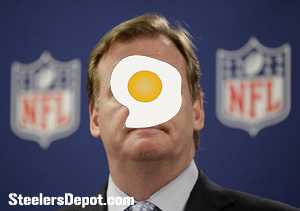 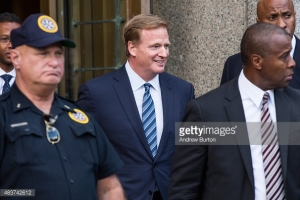 Roger Goodell was on ESPN’s Mike & Mike in the Morning on Tuesday, and as you might’ve guessed, much of the interview centered on his role in Deflategate. Goodell said that he is, “open to changing [his] role,” as essentially the NFL’s discipline czar. After four years of the current CBA, Goodell has finally realized what everyone else has; it’s not a good system.

Goodell said his role has been, “extremely time-consuming” and that he has to be “focused on other issues.” Basically, Goodell came up with a good excuse to step aside. The commissioner has been embarrassed as of late. A year ago, they lost the Adrian Peterson case in court. They completely botched the Ray Rice situation. After suspending the running back a measly two games for knocking his wife unconscious, Goodell happened to find the full video tape many months later, once it was released to the public, and changed it to an indefinite suspension that lasted most of the year, and to this point has essentially ended Rice’s career. If you want to go back even earlier, Goodell quickly laid the hammer down on several Saints players in the wake of Bountygate, and later had the man he succeeded, Paul Tagliabue, come clean up his mess as best he could.

The commissioner’s track record on discipline isn’t necessarily the issue here; everyone knows it’s terrible. Roger Goodell himself has now come to realize that it’s terrible. But, the ego-driven commissioner won’t come out and say he’s done a bad job, instead he’s coming out and making excuses. It’s too time-consuming. I can’t do it on my own. Obviously you can’t do it on your own, you’ve displayed that multiple times. Yet, you wanted that absolute power when negotiating the current CBA. Instead of implementing a system of checks and balances, like we have in every other industry in America including the U.S. government, Goodell made himself the discipline czar of the NFL. And believe it or not, it hasn’t worked.

The most Goodell was willing to concede is that the NFL needs a “better discipline system.” Handing out punishments in the NFL, a league where there are plenty of punishable crimes committed, is one of the hardest jobs in the world, and if it isn’t done with great care, it is done horrendously. Goodell’s way of doing his job has basically been to make it up as he goes along. That works with some jobs, not with his. The NFL desperately needs a new discipline system, because right now it’s spiraling out of control, and the longer they continue with it, the worse it’s going to get.

The NFL is appealing Judge Berman’s decision to vacate Tom Brady’s suspension. Most people believe this is part of unwillingness by the league, and Goodell especially, to accept defeat and admit their wrongs. While that might be part of the reason, it’s a small component. There’s a much larger issue the league is afraid of. The fact that Brady fought his suspension in court, and won, opens up a nightmarish Pandora’s box for the NFL. Now every single player who is suspended, appeals, and does not win his appeal with the league will take the league to court. This isn’t in anyone’s best interest, but right now it’s the only way to provide checks and balances on an industry that has none.

Roger Goodell doesn’t want to let go of his power, but the thing he can’t stand to lose is his ego, and he’ll fight for that as hard as Tom Brady fought for his legacy.