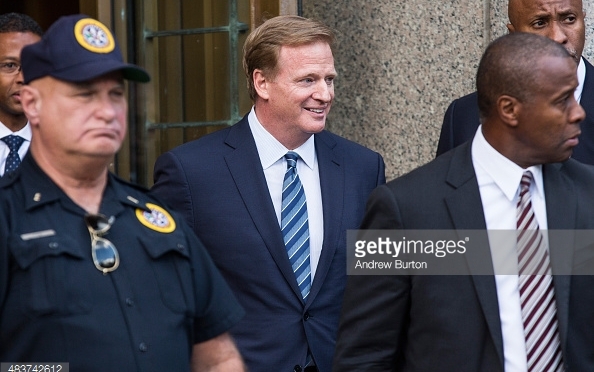 Corruption. Power breeds it, no matter how good one’s intentions are when push comes to shove power destroys ideals. It doesn’t have to be malicious, it rarely is at first but when absolute influence goes unchecked the results are no less poisonous.

Article 46 of the collective bargaining agreement has given Roger Goodell absolute autonomy to rule the NFL. What exactly is article 46 of the CBA? In a nutshell, it allows the commissioner to impose the discipline and to designate the hearing officer (this can also be the Commissioner himself) to handle all appeals in regards to matters relating to conduct detrimental to the integrity of and public confidence in, the game of professional football. This effectively makes him Roger GODell.

Why would the National Football League’s Player’s Association agree to such a grand deliverance of power? To be honest, article 46 has been around since the very first CBA was drafted back in 1968. In a game of give and take the NFLPA for whatever the reason, they always felt this was a car that was better left on the showroom floor. If the past few years abuse of power are any indication, it would seem that the next time the NFL and the Union meet, this will be a point of contention.

The year 2014 is more than likely a year Roger Goodell would like to forget. The Ray Rice scandal was devastating to his tenure as commissioner. In the interest of protecting “the Shield”, Goodell and the NFL thought it best to ignore and deflect rather than hold Ray Rice responsible for assaulting his then fiance. The Commissioner lied about seeing a crucial piece of evidence (elevator video), the world reacted with disgust and Goodell has been over compensating ever since.
It’s safe to say that at the start of the “Save Roger” reclamation project, much of the public was thrilled when he rescinded Ray Rice’s mere two game suspension and changed it to indefinite. Never mind that this act showed that  he was inconsistent but it reeked of desperation. Roger mishandled an important case and tried to cover his tracks ultimately leading to the case being overturned and making his power seem less omnipotent.

Roger hid behind his stature and tried desperately to find a scapegoat to get him out of this mess. Star running back Adrian Peterson’s child abuse case and defensemen Greg Hardy’s assault case weren’t enough to scrub the perceived ineptitude from Goodell’s hands.
The NFL Commissioner needed to deflect all this bad publicity, much to his delight the Baltimore Ravens and Indianapolis Colts were about the hand him a gift. Deflategate arrived like a proverbial wrecking ball and suddenly the world was now focusing on the fall from grace of Tom Brady the cheater.

Roger got his diversion.

Goodell has made his share of mistakes with Deflategate, the most recent being when he came under fire due to his admittance that (after months of saying otherwise) the entire investigation was never really independent. Remember Article 46? Once again, Roger has been delighted to hide behind his greatest weapon, his  magic wand.
In the eyes of the NFL, it doesn’t matter how Roger has handled any of this, Article 46 states he can conduct himself in any manner he sees fit when protecting the integrity of the product. “Save Roger” is in full effect, leaving many players in the NFL to ask who will save them?

One thought on ““Save Roger”: What The NFL is Trying to do at any Expense”