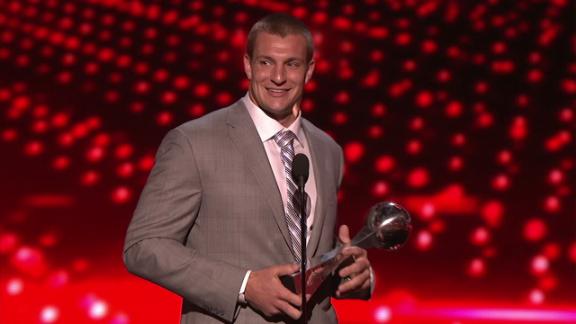 The winner of this year’s Comeback Player of the Year at the ESPYs almost didn’t make it on stage. Heck, at just 21 years old, he faced the possibility of having to turn away from the one thing that propelled him to super stardom and a Super Bowl ring: football.

During his junior year of college, Rob Gronkowski suffered from a ruptured disk in his spinal cord that sidelined him the entire season. He made the gutsy decision to forego his senior season to keep playing football on the professional level. After getting selected in the second round of the 2010 draft by the New England Patriots, the Gronk roared on to the scene, scoring 10 touchdowns for the season and bringing “The Gronk Spike” to fruition. By Week 13 of his sophomore season, he had surpassed his rookie season’s touchdown total AND broken the NFL record for touchdowns scored in a single season.

Then came the playoffs, which ended in heartbreak for more reasons than one.

Another Super Bowl loss to the Giants was gut-wrenching. But getting news that Gronk would have to  undergo surgery to repair strained ligaments in his ankle left fans disheveled. He fought back and had another successful season with 11 more touchdown receptions to boast about before breaking and re-breaking his forearm in 2012. Four forearm surgeries, another back surgery and a surgery to repair a torn ACL AND MCL later, the Gronk found himself overcoming adversity once again. This time, one of the twelve touchdown receptions he scored in the 2014 season came in the second quarter of an unforgettable Super Bowl XLIX victory.

Whether you like it or not, it’s Gronk’s world and we’re just living in it.